You never expect to see any sensible writing about LGBT issues coming from Christian conservatives, but it’s very telling how much they have to lie to make their points. If they were more honest, they wouldn’t be able to gin up enough fear to keep their ignorant readers coming back for more (and giving them money for their ministries).

Dr. Michael Brown, a columnist for Charisma, is one of many Christians who puts on this guise of compassion while ignoring what scientists and psychologists say on the subject of sexuality. He says gay and transgender identities can be “cured.” He says he’s not transphobic, but misgenders them all the time. He also calls them predators.

The latest example is on his Facebook page, where he shared this cartoon: 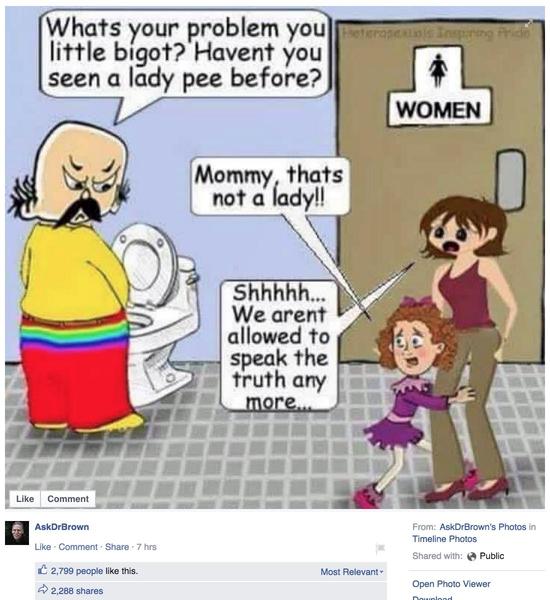 How many inaccuracies and distortions are in there…?

You have the Mike Huckabee-repeated claim that transgender people are just faking it so they can walk into the other gender’s restrooms.

You have the transgender character looking as “manly” as possible while acting like a jerk to complete strangers.

You have the mother saying they’re not allowed to “speak the truth anymore” even though no one’s challenging the rights of intolerant people to say idiotic things.

You have an awkwardly-placed toilet in a women’s public restroom that lacks any sort of privacy.

And men don’t talk while they pee. Checkmate, bigots.

(Brown later edited his post to say: “I understand that the picture is not entirely accurate with the open toilet, although you’ll find this at a small place like a gas station, but the overall point is clear.” Which doesn’t correct his bigger mistakes at all. Also, even at gas stations, you can lock the damn door.)

It’s telling that the character who most resembles Brown’s own view is the child — the one person who’s expected to not get what’s happening and who can be forgiven for not understanding the complexities of gender. Brown, on the other hand, should know better.

The cartoon isn’t funny, but conservative Christians are still the punchline.

(Thanks to Becca for the link)

September 6, 2015
Here's Why the United States is Not a Christian Nation
Next Post

September 6, 2015 We Don't Need to Require Public Officials to Take Their Oaths of Office on the Constitution
Browse Our Archives
What Are Your Thoughts?leave a comment