This is a guest post by Eslam Maher. Maher is the former general manager at “I believe in Science,” a large Arabic project aimed at communicating science and skepticism.

National Geographic‘s August issue, normally translated into Arabic for a Saudi Arabian audience, hasn’t been published in the country. No official statement was given, except for this tweet from the chief editor on the magazine’s Twitter account:

Dear readers in Saudi Arabia, we apologize for you not obtaining August’s magazine. According to the publishing company, the magazine was denied entry for cultural reasons.

Check out the cover and you can take a guess what those “cultural reasons” are: 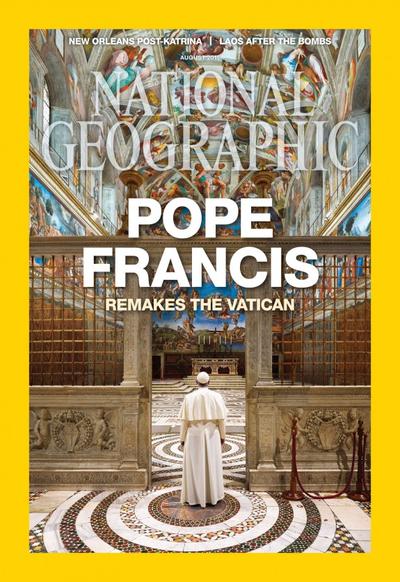 Saudi authorities believe that it’s best to not let its citizens even know about Pope Francis or what he’s doing. As the secular activist Kacem El Ghazzali recently put it (following the release of a preacher who raped and killed his 5-year-old daughter, while Raif Badawi, the liberal freethinker, is still imprisoned): “This is Saudi Arabia: the only member state of the UN not to have signed the Universal Declaration of Human Rights, a state with ZERO minorities rights, ZERO women rights, ZERO human rights ZERO freedom and a lot of oppression and barbaric suppression of dissent!”

As an atheist, I have my own issues with Pope Francis, despite him being deemed called a progressive Christian when compared to his predecessors. But even a moderate Catholic isn’t welcomed in Saudi Arabia? That’s the influence of radical Islam for you. It doesn’t just get in the way of reason and science, it also can’t handle the ideas of other more progressive religions. Keep in mind their core beliefs include regarding Christians as astray. A Muslim repeats that sentiment 17 times daily in his mandatory prayers (1:7). Muslims should not take Christians as allies (5:51), and “when you meet any one of them on the roads force him (Christian or Jew) to go to the narrowest part of it.” (Sahih Muslim 26:5389).

This is not the first time the Arabic version of National Geographic has diverged from the English one on matters touching on science and religion. Just last March, a mention of evolution was removed from the cover while the original tongue-in-cheek title was kept: “The War On Science.”

(Edit: Maher and some Arabic readers have said that the same words may be more accurately translated as “cultural reasons,” not educational ones as we originally posted. I’ve made those changes in the post, though everything else we said has not been altered. Apologies if there was a misinterpretation on our end.)

September 6, 2015
We Don't Need to Require Public Officials to Take Their Oaths of Office on the Constitution
Next Post