Even in His Last Interview, Christopher Hitchens Didn’t Let Up on Mother Teresa September 6, 2015 Hemant Mehta

Even in His Last Interview, Christopher Hitchens Didn’t Let Up on Mother Teresa

In 2011, Richard Dawkins guest-edited the Christmas issue of the New Statesman and included an interview with Christopher Hitchens. It turned out to be the last interview Hitch ever gave. He died that December.

The day after the interview was conducted, Hitchens received an award from Dawkins at the Texas Freethought Convention, where the two embraced in this memorable image: 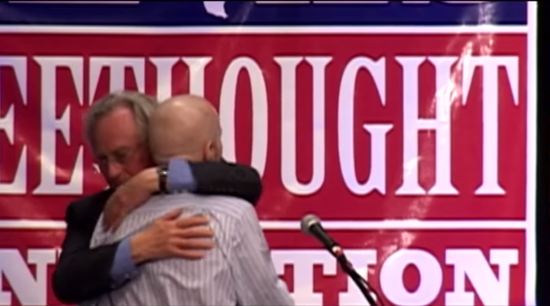 Their printed conversation is now online for the first time. I’ll just include this excerpt of Hitch talking about Mother Teresa, Tony Blair, and Catholicism:

[Mother Teresa] preached that poverty was a gift from God. And she believed that women should not be given control over the reproductive cycle. Mother Teresa spent her whole life making sure that the one cure for poverty we know is sound was not implemented. So Tony Blair knows this but he doesn’t have an answer. If I say, “Your Church preaches against the one cure for poverty,” he doesn’t deny it, but he doesn’t affirm it either. But remember, I did start with a text and I asked him to comment on it first, but he never did. Cardinal Newman said he would rather the whole world and everyone in it be painfully destroyed and condemned for ever to eternal torture than one sinner go unrebuked for the stealing of a sixpence. It’s right there in the centre of the Apologia. The man whose canonisation Tony had been campaigning for. You put these discrepancies in front of him and he’s like all the others. He keeps two sets of books. And this is also, even in an honest person, shady.

September 6, 2015
A Woman Who Grew Up in the Pentecostal Movement Explains the Mindset of Kim Davis
Next Post

September 6, 2015 God's Life Hacks Aren't Very Helpful
Browse Our Archives
What Are Your Thoughts?leave a comment