Now this is a neat and well-deserved honor, and it’s going to someone who calls herself a “proud atheist.”

Rebecca Newberger Goldstein will be receiving the National Humanities Award by President Obama for “bringing philosophy into conversation with culture.” She will be one of ten recipients. 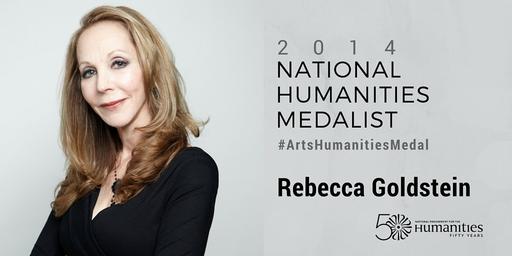 The Center For Inquiry (where she serves as an honorary Board member):

“We are delighted that Rebecca Goldstein has received this well-deserved recognition,” said Ronald A. Lindsay, president and CEO of the Center for Inquiry. “This award is a fitting one, indeed, as her work exemplifies the importance of the humanities. Few writers are as gifted as Rebecca Goldstein is in fiction, or as insightful as she is in nonfiction. Her wide-ranging body of work is philosophically compelling, richly rewarding, and deeply humane, engaging both our intellect and our emotions, and in the process making us laugh, cry, sigh … and think. Whether writing about Plato, Spinoza, or the joys and travails of love, Dr. Goldstein unfailingly manages to illuminate the human condition.”

The Freedom From Religion Foundation (where she serves as honorary director):

Newberger Goldstein received a “Freethought Heroine” award from FFRF in 2011. Read Rebecca’s acceptance speech here, which poignantly chronicled her migration as the silenced daughter of an Orthodox Jewish family to an outspoken expositor of reason.

Newberger Goldstein received her Ph.D. in philosophy from Princeton University and taught philosophy for most of her life. She is the recipient of many awards for both her artistic and scholarly works. In 1996 she was named a MacArthur Fellow (the “genius” award). She is married to Harvard evolutionary psychologist Steven Pinker, currently serving as FFRF’s Honorary President.

The American Humanist Association (which awarded her “Humanist of the Year” in 2011):

“Rebecca Goldstein’s eloquent writing is profoundly impacting the humanist movement and the fields of literature and philosophy,” said Roy Speckhardt, executive director of the American Humanist Association. “Her work resonates with the positive humanist values of reason and empathy, and the world is richer for her contributions.”

Goldstein will receive the honor at the White House on September 10.

September 3, 2015
Maybe We Should Be Helping Out the Psychics
Next Post