The other day, I posted about how a pastor from First Baptist Villa Rica church (in Georgia) conducted a mass baptism before Villa Rica High School’s football practice. It was on school property and it involved players and a coach.

Already, you should be able to spot multiple violations of the law. 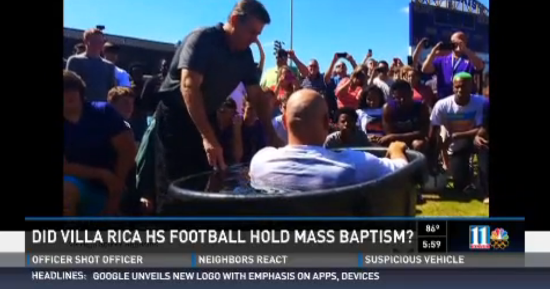 The Freedom From Religion Foundation sent the Carroll County School System a letter telling them to stop this immediately and the District said they’re looking into this.

In the meantime, the pastor who conducted the baptisms, Kevin Williams, is showing off just how ignorant he is by asking some incredibly idiotic questions, each one dumber than the last:

Williams said he believes that “we live in a free country.”

Oh, the fake persecution… it hurts.

No one’s saying he can’t baptize students. He has a church. The students can drop in on their own time. So can the coach. Why isn’t that good enough? Why does he have to come on school property to indoctrinate students?

It’s also not illegal to bow your head and pray. Even in a public school! But coaches have power over their athletes and getting baptized on the football field sends the message that this is what the coach wants the players to do. Students are pressured into joining him whether they want to or not. That’s why it’s illegal.

And it’s not illegal to say “I’m a Christian.” You know how I know that? Because Williams said it and no one’s arresting him.

This isn’t Christian persecution. This is a Christian offended by the idea of playing by the same rules as everyone else.

Maybe this would be easier for Williams to understand if someone from the Satanic Temple dropped by the school to conduct a Black Mass at the coach’s request and students were involved. Would that be religious freedom or something that needs to be stopped?

He doesn’t get it because he’s never been in the religious minority. But I’m not even blaming him. He’s a pastor. He’s not expected to know better when it comes to church/state separation issues.

District officials, however, should. They should have put a stop to this before it happened. But FFRF is giving them the benefit of the doubt, assuming they didn’t know about it, and just asking them to make sure it doesn’t happen in the future.

All the District has to do is respond by saying, “We’ll enforce the law from now on,” and live up to that promise.

September 4, 2015
14 Quick Takes on the Jailing of Kim Davis
Next Post

September 4, 2015 Oklahoma Attorney General Can't Decide if Ten Commandments Monument is Religious or Not
Browse Our Archives
What Are Your Thoughts?leave a comment