If you want to prevent more mass shootings in the United States, what do you do?

According to Spike’s Tactical, a gun manufacturer in Apopka, Florida, you don’t need to bother with any of those things. They solved the problem by creating a weapon with a Bible verse etched on to the magazine well so Muslims won’t touch it: 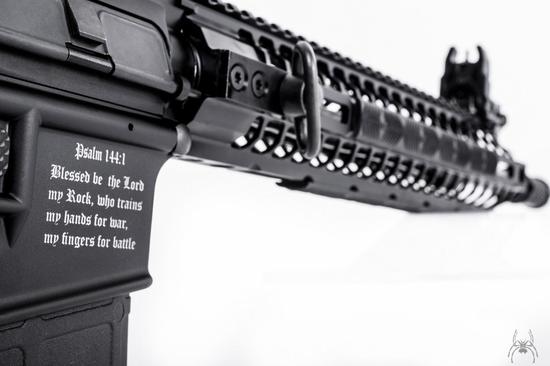 The AR-15 assault rifle is laser-etched on one side with a Knights Templar Long Cross — a symbol of the Christian Crusades to reclaim the Holy Land from Muslims — and Psalm 144:1 on the other side: “Blessed be the Lord my Rock, who trains my hands for war, my fingers for battle.”

The company’s spokesman, former Navy SEAL Ben “Mookie” Thomas said he came up with the idea and believes no devout Muslim would touch such a weapon.

“Off the cuff I said I’d like to have a gun that if a Muslim terrorist picked it up a bolt of lightning would hit and knock him dead,” Thomas said.

Thomas seriously thinks Muslim extremists, who already interpret the Qur’an in a way that justifies killing innocent people, will be stopped by a gun with a Bible passage on it. (If anything, they could find poetic justice in killing Christians with a weapon called the “Crusader.”)

So even if Muslim extremists don’t touch it, Christian terrorists will love their brand new toy.

The executive director of Florida’s chapter of the Council for Islamic Relations told a journalist that the Crusader wouldn’t solve anything, given that “out of 205 mass killings so far this year in the U.S. only one involved a Muslim.” He added:

“We need to have a conversation on gun violence. There has been utter silence from gun manufacturers. It’s time for them to stop trying to make a buck on this.”

Good luck talking sense into a Christianist weapons manufacturer, someone who embodies the frightening intersection of guns and religion.

Since they’re not going to stop manufacturing these weapons, here’s another idea: How about creating a gun with the message “Thou shalt not kill”?

(Image via Spike’s Tactical. Thanks to Torrey for the link)