In the U.S., 49% of Former Catholics Have Left Organized Religion for Good September 3, 2015 Hemant Mehta

In the U.S., 49% of Former Catholics Have Left Organized Religion for Good

Last week, the Public Religion Research Institute in partnership with Religion News Service released a comprehensive survey of American Catholics, and we’re still getting reports on what they found.

The latest analysis focuses on where ex-Catholics go — to another religion or out of the game altogether? — and the answer won’t surprise you.

About half of the people who leave Catholicism become “Unaffiliated,” essentially saying goodbye to organized religion altogether: 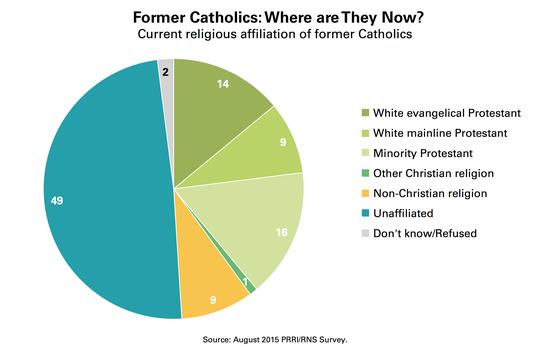 It’s telling that so many people who decide to leave Catholicism do so because they realize the whole organized religion game is not for them. They’re not even bothering to give another faith a shot. It’d be a waste of time for them.

Bear in mind that many of the people who still call themselves Catholic don’t even agree with the Church’s positions on some hot-button issues, and you have to wonder how many Catholics are left whose beliefs actually align perfectly with the Church.