Mat Staver, the Liberty Counsel lawyer who’s defending Christian bigot Kim Davis in her quest to be a government employee who doesn’t have to do her job, is bending over backwards trying to rationalize bigotry.

His latest argument, which he alluded to on MSNBC last night and said outright on Steve Malzberg‘s Newsmax program today, is that the 20,000+ people who live and pay taxes in Rowan County, Kentucky simply have to drive 30 minutes out of their way (to another county) to obtain a marriage license if they want one — all so that a Christian doesn’t have to do the job she was elected for and gets paid to do. 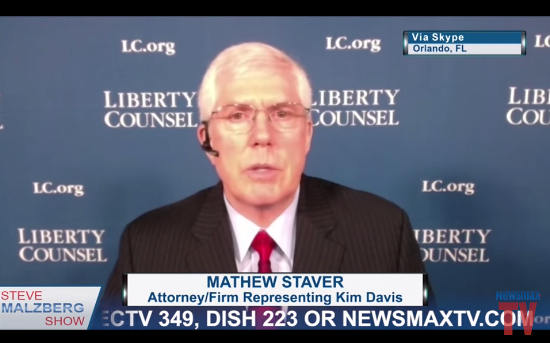 The simple issue that can be resolved is her religious conscience and convictions. You have 120 counties in Kentucky and you have additional jurisdictions that can issue licenses. So it’s 130 plus venues; you drive 30 minutes in any direction in Kentucky and get a marriage license. You don’t have to force Kim Davis herself to issue the license.

No one, of course, is forcing her to do anything. This is a job she voluntarily signed up for. She’s welcome to keep her faith-based contempt for same-sex couples, but she has no business doing it when serving the government.

She’ll be in court tomorrow. Have fun seeing Staver represent her, because if the judge levies some harsh fines against Davis and the state, he’ll be long gone, moving on to the next Christian martyr who will give him free publicity.