Back in May, a student sent me a page from the Rossford Exempted Village Schools handbook. The Ohio public school district listed its “core values” in the book and one of them was acknowledging that a “Higher power exists”: 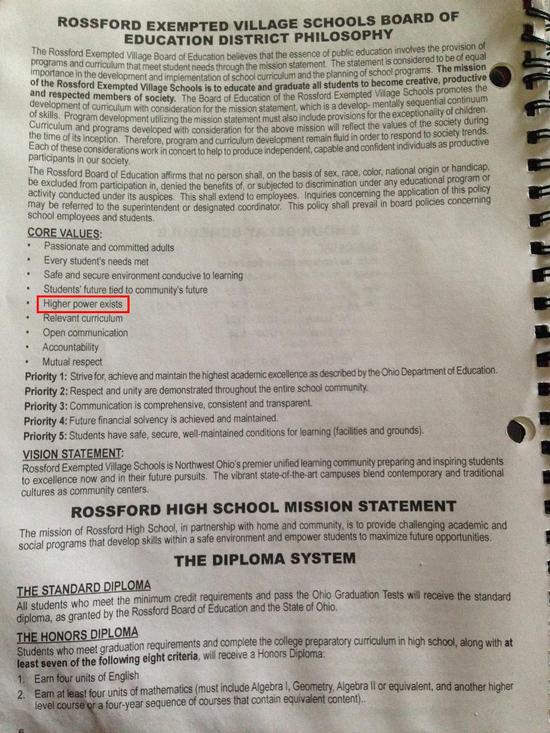 That was out of place and illegal… (not to mention really grammatically awkward).

The Freedom From Religion Foundation sent a letter to Superintendent Dan Creps asking him to remove that item from the list:

Listing “Higher power exists” as a core value violates the First Amendment because it imposes religious sentiments upon students and their parents within the school district. Students and their parents cannot possibly conclude that “Higher power exists” on the list of core values is merely a “suggestion.” This statement clearly demonstrates that the school not only prefers religion over non-religion but also religious students over non-religious students. This value enunciated by the District offends the one in three young Americans who are not religious.

This was an easy complaint to make. Believing in a Higher Power doesn’t make you a better person and it’s not a “value” public schools should be promoting.

I’m happy to say the FFRF just got word from the Superintendent that the phrase would be stricken from future editions of the handbook. No prolonged battle. No argument. Just an admission that it would be removed.

Smart move by the District.

September 1, 2015
The Donald Trumping of the Religious Right
Next Post

September 1, 2015 Please Support the Work I Do Through This Site
Browse Our Archives
What Are Your Thoughts?leave a comment