A Missouri Sheriff Put “In God We Trust” on All Department Cars, Upsetting One Reader in Particular August 31, 2015 Hemant Mehta

A Missouri Sheriff Put “In God We Trust” on All Department Cars, Upsetting One Reader in Particular

A lot of Sheriff’s Departments have been putting the phrase “In God We Trust” on their cars. Because they can hide behind the “It’s just our national motto” excuse, they’re thrilled to preach Christianity in a way that’s immune from legal action. The Freedom From Religion Foundation, however, has sent letters to various departments asking them to reverse course.

One particular department, in Missouri, rubbed a reader the wrong way. 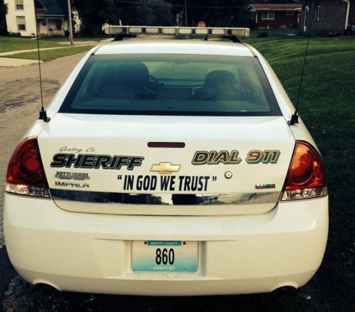 Some background helps: She told me that her dad was Sheriff in Gentry County, Missouri for 28 years (elected for seven consecutive terms). He was an atheist personally but never spoke out against religion in public. He had a great reputation. Even criminals wanted to be tried in his jail because they knew, under his care, they would be safe, not go hungry, and their families would be kept up-to-date about their situations.

Aside from his work as the county sheriff, my dad (with my mother) raised 6 daughters, and multiple foster children. He also single handedly cared for an 11 acre garden/orchard, which he opened up to the community. Everyone knew that if you were in need of food, all you had to do was tell my dad, and he’d bring you a basket from the garden, or you could just go down to the garden and pick your own.

You can tell he was an upstanding guy.

I’m sad to say he died three months ago.

The new sheriff seems to have waited for the public mourning to subside before slapping the phrase on cars in the department. It’s something the reader’s dad would never have allowed during his tenure.

So when the image above was posted on Facebook, the reader was especially upset and enraged. Why?

While people may not have known her father was an atheist, it’s just another reason our government shouldn’t get in the religion game.

August 31, 2015
Anti-Superstition Activist M.M. Kalburgi Shot Outside His Home in India
Next Post