A Christian College President Resigned Due to “Health Concerns”; He Was Actually Caught Having an Affair August 31, 2015 Hemant Mehta

A Christian College President Resigned Due to “Health Concerns”; He Was Actually Caught Having an Affair

Back in January, when South Carolina-based North Greenville College — affiliated with the Southern Baptist Convention — announced the retirement of President Jimmy Epting, the press release made clear it was because of health concerns: 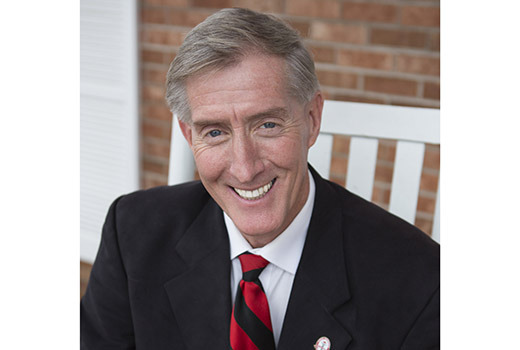 The North Greenville University board of trustees has announced that Jimmy Epting, the school’s president for the last 23 years, will be taking a sabbatical leave during the current semester and will retire at the end of the school’s fiscal year in May.

[Chief academic officer Randall J.] Pannell said Epting has some health concerns “but no life-threatening issue at this point.”

“This was a little bit of a surprise, but not a complete surprise,” he said of Epting’s decision to request a sabbatical. “The catalyst was the health issue.”

That turned out to be a lie.

In fact, just months before that announcement was made, Epting’s son caught his dad at home allegedly having an affair with another staffer — an incident he captured on video that was released publicly just days ago. (Given the circumstances, we’ll let the vertical video thing slide.)

The school sent an email to staff and students saying they were aware of the video, but a statement to a news station suggests no possible wrong-doing on their part:

North Greenville University’s leaders are expected to lead Christ-centered lives and abide by all campus policies and procedures. The administration and faculty on campus today reflect our legal, moral and ethical expectations. We take our responsibilities as leaders of a Christian institution seriously and hold each member of our community to the highest of standards.

That’s nice. They’re reflecting. I guess, until now, those commandments about lying and adultery slipped their minds.

This is a school, by the way, where the handbook says students can be kicked out for minor infractions like drinking.

And don’t even think about doing anything gay. That’d be immoral:

Any individual, or group, who is obscene, lewd, indecent, or participates in any sexual activity outside the bonds of marriage, defined as the legal union of one man and one woman, violates Christian principles and practices.

But if the school’s President breaks the moral code, he gets to take the high road (unless there’s videotape evidence and the press gets involved).

It’s worth saying in light of the Josh Duggar scandal: Epting’s infidelity shouldn’t be anyone’s business but his family’s. If the Christian school administrators want to kick him out as a result, that’s their decision, too.

But the appalling thing here is the hypocrisy, of school officials lying to students about the reason Epting was dismissed and Epting himself for saying one thing and doing another.

How many examples of this do we need to show before it’s understood that Christians don’t get to claim the moral high ground on any of these issues?

August 31, 2015
Here's How Common It Is for a High School Football Coach to Lead the Team in Prayer Before a Game
Next Post