A Four-Part Plan to End Discrimination Against Atheists (and Other Non-Catholics) in Irish Schools August 30, 2015 Hemant Mehta

In Ireland, where even State-funded schools are almost always run by the Catholic Church, students, parents, and teachers who don’t belong to the faith can be discriminated against in a variety of ways. Some students have even been denied admission into public schools for their non-Catholic beliefs. Making matters worse, the Irish government is considering two bills dealing with school admission and employment equality that would further alienate people of minority faiths or no faith.

In the Irish Times, Michael Nugent lays out four ways the government can fix the problem: 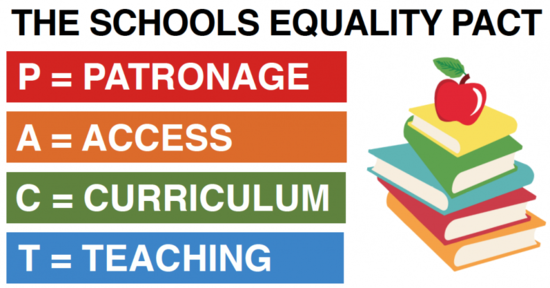 Patronage. Children have a right to attend inclusive public schools. State-funded schools should have an inclusive public ethos. Moral education should be separate from religion. The State should not cede control to private patrons. Private ethos schools should be an optional extra, not the basis of the system. Reform should start now in the nine schools where the Minister for Education is patron.

Access: Children should have equal access to their local State-funded school whatever their religion. The current Admission to Schools Bill reinforces the right to religiously discriminate, calling it “lawful oversubscription criteria”. If schools are oversubscribed, priority should go to siblings of pupils, then local children, then a lottery.

Curriculum: Children have a right to an objective pluralist education. They should be taught the State curriculum, including about religions and beliefs in an objective, critical and pluralistic manner. Faith formation should be outside the school day. Rule 68 of national schools must go. It says religious instruction is by far the most important subject, and a religious spirit must inform and vivify the whole work of the school.

As someone who worked in a public school for years, all of this just seems so damn obvious. Of course the government should implement these idea. It’s obvious that’s what’s best for all students. But I forget just how entrenched in religion Irish schools are. However, removing faith from the education equation wouldn’t hurt students at all. Just because it’s tradition doesn’t mean it has to continue.

You can sign this petition in support of PACT to show your solidarity with the Irish atheists.