Sarah Palin Interviewed Donald Trump. (What’s the Opposite of a Meeting of the Minds?) August 29, 2015 Hemant Mehta

Sarah Palin Interviewed Donald Trump. (What’s the Opposite of a Meeting of the Minds?)

What happens when an ex-Governor who doesn’t know anything interviews a blowhard who thinks he knows everything?

Nothing. Nothing happens. There’s no substance. No depth. Just meaningless babble about how much everything sucks and an understanding that it’ll all just get magically fixed when their side is in charge. 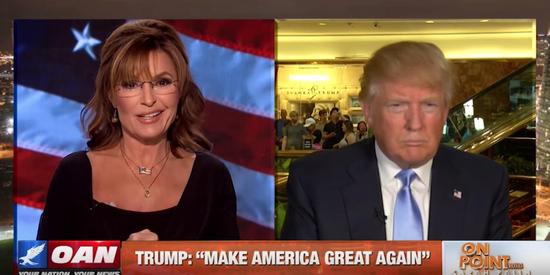 Palin had a chance to ask real questions; instead, she threw him softballs.

I know most of you know this, but it still needs to be said: Sarah Palin was almost our next Vice President. Donald Trump could be our next President. It’s easy to dismiss his candidacy, but we’re forgetting how ignorant, easy to manipulate, and impervious to reason most Americans are.

We have two major political parties in this country. And these people represent the “best” of what one of them has to offer.

Is it any wonder politics is so frustrating? For 10 minutes here, all we heard was tough-sounding rhetoric from people who never bother to study the issues. (You’d think Trump could at least surround himself with expert advisors, but I don’t think it’s possible for him to think he’s not the smartest person in the room.)

Part of me wants Trump to win the GOP nomination because I think he’d be easy to beat in a Presidential race. But it’s also a frightening prospect.

If the Democrat blows it somehow, he could theoretically win.

We’d have an entire election year with no real conversations between the candidates over issues that matter. You can’t have a debate when one side’s knowledge of every meaningful issue boils down to “It’s bad.”

Trump loves to surround himself with people who think he’s amazing, and Palin’s itching for any reason to get back into the limelight. I don’t think I could take four years (or more) of President and Vice President Beavis and Butthead.

Save us, Canada. You’re our only hope.