Darrell Trigg, the Christian Party Candidate Who Wants to Protect Marriage, Got Divorced in 2013

Darrell Trigg (below) wants to be the next President. He’s the candidate for the Christian Party — a party that I’m pretty sure has a total membership of one — and his platform is a mish-mash of right-wing talking points. 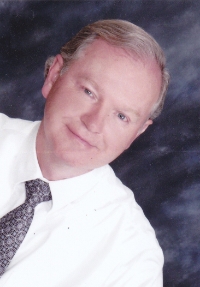 He wants to eradicate separation of church and state, bring mandatory prayer back to public schools, stop any legal recognition of homosexuality, increase the drinking age to 25, and ban nudity and bad language on television.

And then you get to the part about how he would protect marriage:

Marriage will be defined as the union of one woman with one man.

The legal age for marriage will be 22.

A couple wishing to get married must first attend Christian marriage counseling classes.

Divorce will only be allowed in cases of abuse, infidelity, or incarceration.

The penalties for abuse and infidelity will include large fines and jail time.

Why bring that up?

Because reader Robert uncovered an interesting little bit of information: It turns out Trigg himself got divorced in 2013.

You won’t find that nugget anywhere in his biography.

According to the document (which includes the same full names and place of business found on Trigg’s campaign website), the grounds for divorce were “irreconcilable differences and, alternatively, inappropriate marital conduct.” In proceedings that lasted for nearly three years, Trigg said that his religious beliefs were a reason “not to allow the dissolution of their marriage,” but the courts allowed it, anyway.

This shouldn’t be any of our business. But when President Trigg says he’ll only allow divorces in the cases of abuse, infidelity, or incarceration — and when the penalties for abuse and infidelity include fines and jail time — we have to ask:

Which of those “sins” did Trigg commit? Was he incarcerated? If not, how much of a fine does he think he should have to pay and when’s he going to jail?

Or is his platform merely wishful because, if implemented, it would have prevented his wife from divorcing him?

This is why legislating morality doesn’t work. The hypocrisy eventually comes through because Christians are not better people than the rest of us.

You may be against abortion… until you need one yourself.

You may oppose gay rights… until someone you know personally wants to get married to someone of the same sex.

You may believe divorce is wrong… until your own marriage falls apart and it’s the only way out.

What’s really fascinating is how Trigg glosses over the end of his marriage in his biography. It’s not that he doesn’t mention it (which I could understand); it’s that readers are left thinking they’re still married.

Just look at the end of the biography on his campaign site:

Darrell has often told Lori that one of the reasons that he fell in love with her was her extreme love and affection for her sons and because she was an excellent Mother. Such attributes can only originate from a wonderful heart full of God’s love.

Darrell and Lori own a farm near Rogersville. They have had several gardens, cattle, dogs, cats, and chickens.

A few years ago, Darrell felt God’s calling to write a campaign platform that dealt with several problems facing our nation. When he read this to Lori for the first time, she became very enthused. This inspired Darrell to continue the development of the campaign and to plan the formation of The Christian Party, one that asks God to be an integral part of our government. One that hearkens unto His Word , follows His commandments, and walks in His ways. One that honors God and does not defy Him. Darrell also realizes the need to get many of our manufacturing jobs back into this country and to protect the family and the home. He realizes that the home and the family is the backbone of any society. Marriage should be Holy Matrimony and not just an agreement that can be easily broken. Darrell also realizes the importance of honoring and teaching God’s Holy Word to our children.

I don’t know if that almost-last line is a subtle rebuke against his wife’s decision to end the marriage, but a casual reader would certainly never get the sense that their marriage ended.

A Christian politician who isn’t fully honest. What else is new.

August 28, 2015 Christian Pastor: A Woman Gave Me Money and Her Baby's Brain Tumors Disappeared
Browse Our Archives
What Are Your Thoughts?leave a comment