This Church Responded to Anti-Gay Vandalism In a Beautiful Way August 27, 2015 Camille Beredjick

This Church Responded to Anti-Gay Vandalism In a Beautiful Way

In parts of North Carolina, homophobia is alive and well — but so is resilience. And resilience, it turns out, is rainbow-colored.

Wedgewood Church in Charlotte is well-known as an LGBT-friendly church, and this month they placed a sign on the front lawn that read “LGBT Equality.” Shortly after, still-unidentified vandals spray-painted “Fags are Pedos” across the church’s front doors and crossed out the words on the sign with black paint. 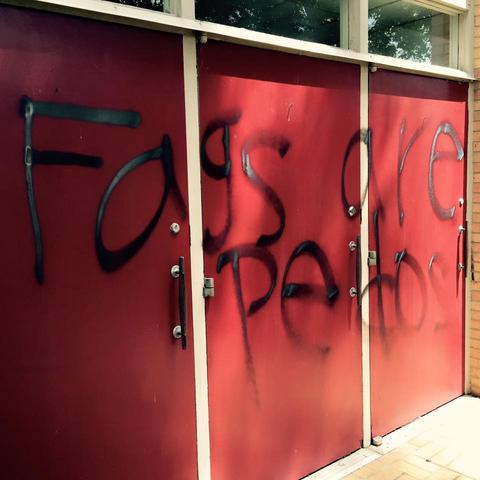 In a lengthy Facebook post, Wedgewood Rev. Chris Ayers called the vandalism “heart-piercing.” and told The Huffington Post in an interview that he didn’t interpret the incident as an attack on his church as much as a general expression of hate against the local LGBT community as a whole.

“I thought of my friends and all the people throughout the years whose stories I’ve heard over the years, and how this was just one more rejection,” he said in the interview.

After church members posted photos of the vandalism online, community members responded in droves asking how they could help. So the church decided to come together and paint Westwood’s front doors a giant rainbow, a sign to the community as a whole that love and support would outshine hate. 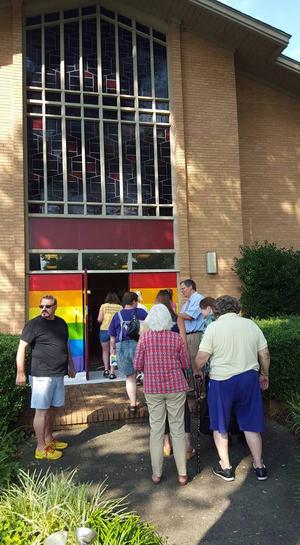 Ayers said the paint job is just one more example of how Wedgewood aims to “let people know “that there are churches and Christians out there who believe that sexual orientation and gender identity are not sins, but great gifts from God,” as well as “celebrate the tremendous courage for those who came out so long ago and set the stage for the wonderful things that have happened.”

Ayers said the response has been overwhelmingly positive, except for one unpleasant email. But that doesn’t faze him.

“We don’t worry about that. We’ve had people unhappy with us for a long time, so that doesn’t really bother us,” he said. “We’re for the full equality of all people, and [the LGBT community] is an important part of that.”

This is Christianity done right. “Love thy neighbor” means loving thy gay neighbors, too, and fighting back when others try to intimidate them. And who wouldn’t want a church painted in rainbows, anyway?