***Update***: The Archdiocese of Portland offered this subtle reminder that the status of St. Mary’s as an affiliated school may be in jeopardy.

Just yesterday, I posted about how St. Mary’s Academy in Portland, Oregon rescinded a job offer from Lauren Brown (below) because she happened to be gay. That, despite her impeccable credentials and willingness to take a pay cut from her previous job.

What made the story even more disturbing than usual was that school officials offered to give Brown a year’s salary with benefits if she promised not to go to the press with this story.

She declined the money, went to the press, and the school is now dealing with all the backlash they hoped to avoid.

But the school may finally be doing the right thing. Late last night, St. Mary’s issued a statement saying they were going to add sexual orientation to their “equal employment opportunity policy.” 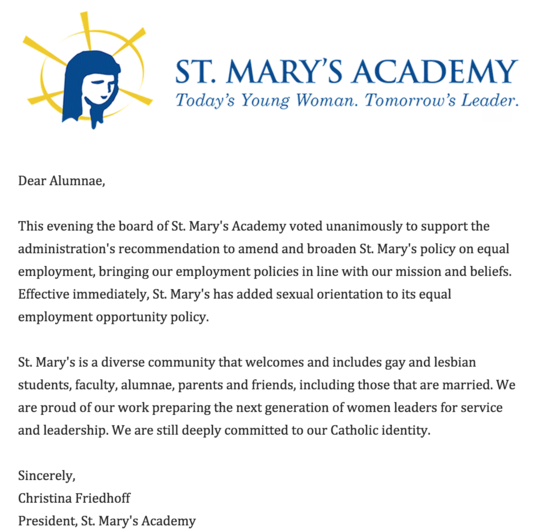 A graduate of the school told me this via email:

… I have never in my life experienced openness and compassion the way I did at SMA. I was taught that everyone was a human being worthy of dignity — gay, straight, black, white, purple, whatever (and, side note, they HAVE openly gay faculty, and have had for years, which just made this whole thing weirder).

If you’d told me 2 days ago that SMA would end up being written up on Friendly Atheist, I never would have believed it. Which is why their alumnae will not just let this drop — we’re thrilled at the school’s reversal, but I know my SMA sisters, and we will not move past this until we understand why such an uncharacteristic decision was made in the first place, and how we can ensure our beloved school does not lose sight of the compassion it instilled in its graduates.

Before you give the school too much credit, though, a couple of important questions still remain:

Will St. Mary’s continue to fire gay faculty members who get married? (That’s typically been the deal breaker at Catholic schools since it directly goes against Church teachings.)

Will the school try to rehire Brown?

And would Brown even accept if they did?

We don’t know the answer to any of those questions yet. Though, for her sake, I hope Brown gets invited back and says yes. They could use more sensible people like her on staff. Anything to counter the bigots who made the decision to fire her and pay her off in the first place.