I thought someone like Pat Robertson would have been the first to link Tuesday’s shootings of WDBJ journalists Alison Parker and Adam Ward to people not being Christian enough.

Instead, that (dis)honor went to Bill O’Reilly.

On his show tonight, O’Reilly said that shooter Vester Lee Flanagan committed the despicable crimes because he turned away from spirituality: 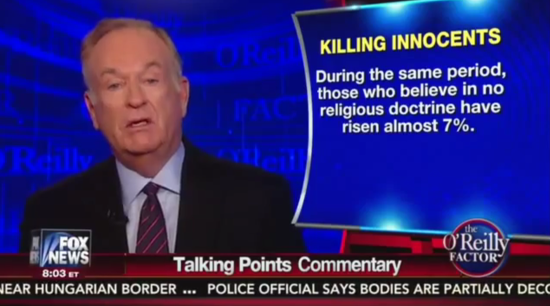 What [Marco] Rubio was spotlighting is the rise in nihilism and a decline in spiritual belief. A person practicing nihilism believes in nothing but his or her own desires…

There is no question that America is not turning away from spiritualism and embracing the culture of me. What I want.

Since 2007, Americans describing themselves as Christian declined almost 8% while those who believe in no religious doctrine have risen almost 7%.

In many media precincts, religious folks are openly mocked, considered to be fanatics…

If you do not believe in anything, anything goes.

Every single murderer over 40 years that I have covered in these circumstances has been either atheistic, agnostic, no religious basis at all.

The spiritualism falls apart in the face of the jihad, okay, which is a perversion of Islam, we all know that. But over the years and centuries, religion has been used to justify murder, even in the Christian precincts. That has happened. But individuals in this country now, I believe, are tending away from spirituality and into the secular-progressive “it’s all about me.” And when you combine that with a mental illness, you have what you had in Virginia yesterday.

What’s especially odd is what went unmentioned in the segment. Flanagan himself said (in what’s believed to be his manifesto) that he was acting on the wishes of Jehovah, being a Jehovah’s Witness himself.

Whatever he was, atheist wasn’t it.

O’Reilly’s guest, Psychotherapist Karen Ruskin, pushed back against his idiotic claims about how radical Muslims don’t count as religious killers and how the other shooters are always non-religious, but somehow, her logic didn’t get through to him. (Surprise!) She’s right when she says we simply don’t know the religious beliefs of many of these mass shooters.

Only one killer in recently memory was openly atheist — he killed three Muslims earlier this year — and all the evidence suggests their religious differences played no part in the incident.

To suggest that these mass murders are happening because we’re turning away from God is pure bullshit. Unfortunately, that’s exactly what O’Reilly’s audience thrives on.

(via Mediaite. Thanks to Randy for the link)

August 27, 2015
Mississippi is Losing a Fantastic Atheist Teacher and I Couldn't Be More Excited
Next Post