By now, you’ve probably heard about (and seen) the horrific shooting of reporter Alison Parker and cameraman Adam Ward (below). The WDBJ-TV journalists were in the middle of conducting a live interview this morning when former employee Vester Lee Flanagan, who went by “Bryce Williams” on air, shot and killed them both. 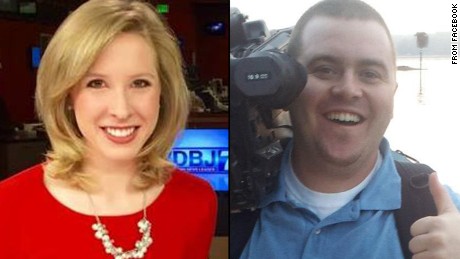 ABC is reporting that it received a 23-page fax from the shooter before he killed himself, in which he gives as his motivation the racism and homophobia he experienced as a gay black man and a directive to act from Jehovah (Flanagan was a Jehovah’s Witness):

He writes what triggered today’s carnage was his reaction to the racism of the Charleston church shooting:

“Why did I do it? I put down a deposit for a gun on 6/19/15. The Church shooting in Charleston happened on 6/17/15… What sent me over the top was the church shooting. And my hollow point bullets have the victims’ initials on them.”

…He said Jehovah spoke to him, telling him to act.

Later in the manifesto, the writer quotes the Virginia Tech mass killer, Seung Hui Cho, calls him “his boy,” and expresses admiration for the Columbine High School killers…

In an often rambling letter to the authorities, and family and friends, he writes of a long list of grievances. In one part of the document, Williams calls it a “Suicide Note for Friends and Family.”

“Yes, it will sound like I am angry…I am. And I have every right to be. But when I leave this Earth, the only emotion I want to feel is peace….”

“The church shooting was the tipping point…but my anger has been building steadily…I’ve been a human powder keg for a while…just waiting to go BOOM!!!!”

It’s all too common for killers to report that they were acting on divine instruction.

In just a casual sampling from the past year, one sees sad tales such as the West Virginia woman charged earlier this month with attempted murder after trying to stab her husband because “she thought he was filled with demons and that God told her to kill him.”

Last month, a California man was convicted of strangling his mother and trying to burn her in an oven because “God told him his mother was a witch and commanded him to kill and burn the witches.”

In May, a Missouri woman was charged with letting her 2-year-old daughter die after “God told her” to allow her sibling to torture the girl. Additionally, a Pennsylvania man shot his uncle while saying “It’s God’s will.”

In April of last year, a Tennessee man killed a friend visiting his mother because God told him to.

In January, a suspected serial killer in Ivory Coast after allegedly hacking dozens of children to death, because “God had told him “to cut off children’s heads … and then I would be made king.”

In December, a UK man was convicted of murdering a woman friend after saying to her, “God wants me to kill you.”

As most atheists will tell you, just because God says you need to do something, it doesn’t mean you need to listen.