You may have heard about how 1st Lt. Shaye Haver and Capt. Kristen Griest recently became the first women to graduate the U.S. Army Ranger School at Fort Benning, Georgia.

What you may not have heard was that their graduation began with a long homage to Jesus: 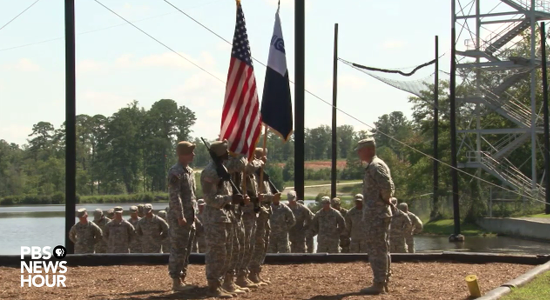 The Military Religious Freedom Foundation has the transcript:

I invite you to join me in prayer, and I will be praying in Jesus’ name.

Almighty God, it is right for us to thank you this morning, for you have created life in such a way, and demonstrated through the life of your own son that nothing worthwhile in life comes without a price. We know that this is true in our nation’s history and this is true for these Rangers today.

These Rangers have indeed persevered, and overcome obstacles such as scrutiny, illness, deprivation, and even lightning strikes. We praise you for creating these Rangers and sovereignly working in their lives, that you would knit within the very fabric of them, the attributes and competencies necessary to fight on to the Ranger objective and complete the mission. Their mission has just begun: to be ready to lead American soldiers in combat. Keep them ever-dependent upon you and one another, that they might continue to live as more elite soldiers in every aspect of their chosen professions: physically, tactically, and morally.

We thank you for the Ranger cadre who did more than evaluate their performance, but exemplified and instructed what it means to live as a Ranger. We commit those Rangers who are fighting the good fight even now, and those Rangers who have paid the ultimate sacrifice, and all of their families, to your powerful and personal care.

I pray in Jesus’ name, amen.

MRFF’s Mikey Weinstein is furious about this, saying that on a day we should’ve been celebrating a tremendous leap forward, we also took several steps backward:

To those who watched the invocation, the takeaway was as clear as could be. To wit, on the one hand, the U.S. Army can ardently pat itself on the back for its gender-inclusionary policies. However, tragically, with its other hand, the Army was plunging a razor-sharpened cross of Christian triumphalism and exceptionalism through its very own soldiers’ precious First Amendment religious freedom rights, as well as their Fifth and Fourteenth Amendment equal protection civil rights and the No Religious Test mandates of Clause 3, Article VI of the body of the United States Constitution. Indeed, the Army made it quite clear to the fervently observing world just how MUCH it craves and adores its unabashed drug addiction to militaristic Christian supremacy. The adverse implications for critical American national security should be obvious to all: this travesty is a propaganda bonanza bounty of unparalleled proportions for our Islamist foes, and a callous spit in the face of our Muslim allies.

… This Fort Benning Ranger School invocation was a despicable and asinine act of Constitutional defiance and criminality. Because of those two valiant first-ever female graduates, it was seen, and no-doubt fully internalized, planet-wide as never before. Pathetically, it made an absolute mockery of the countless Department of Defense rules and regulations relating to church-state separation in the U.S. military, not to mention the bedrock values of the United States of America. Let us NEVER forget that such values are recognized by the solemn oath sworn by all service members to sustain, protect and defend the United States Constitution and NOT some derelict chaplain’s personal version of the Gospel of Jesus Christ.

I don’t think he liked it.

Even if you think he’s making too big a deal of it, I have to agree that the invocation had no place at the ceremony. Unlike a city council, where people of any faith and no faith can sign up to deliver the invocations, there’s no doubt that a military invocation can only be Christian. (Can you even imagine the uproar if a Muslim delivered it instead?)

At a celebration of that nature, the last thing graduates should have to think about is how much they’ll be ostracized for remaining seated during the invocation. The fact that it was optional was irrelevant because of all the social pressure to participate. The Army would be better off removing the invocations from graduation ceremonies altogether. It’s the graduates, not God, who deserve to be praised for all their hard work.