The last time we mentioned former baseball pitcher Curt Schilling on this site, it’s because he was promoting Creationism on Twitter. He later said he accepts evolution, but only within species — a line of anti-evolution reasoning that even Ken Ham would agree with.

You won’t be surprised to learn that Schilling said something else really dumb on Twitter yesterday: 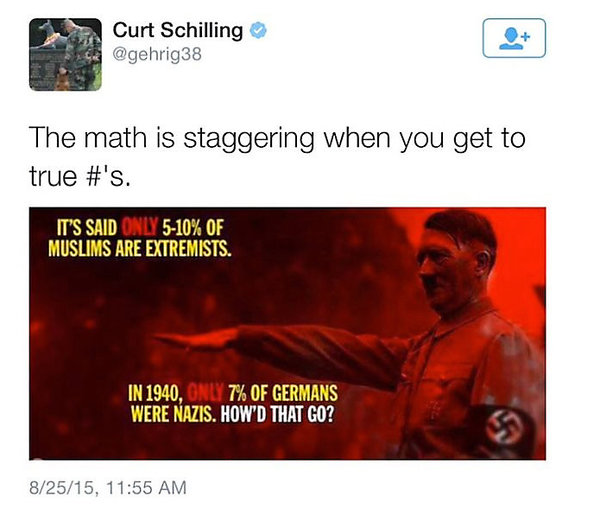 Schilling quickly deleted it but not before screenshots could be captured.

ESPN also pulled him from his assignment calling games for the Little League World Series:

In a statement, ESPN said: “Curt’s tweet was completely unacceptable, and in no way represents our company’s perspective. We made that point very strongly to Curt and have removed him from his current Little League assignment pending further consideration.”

I understand and accept my suspension. 100% my fault. Bad choices have bad consequences and this was a bad decision in every way on my part.

By the way, 5-10% of Muslims aren’t extremists. That number was pulled out of someone’s ass.

There are approximately 1.6 billion Muslims in the world.

5% would put you at 80 million extremists (who would presumably kill you if they had the chance). Estimated size of ISIS? 50,000.

August 26, 2015
Putting Six Degrees of Separation to the Test
Next Post

August 26, 2015 This Portrait of Jesus Has No Business in a Kentucky Courthouse
Browse Our Archives
What Are Your Thoughts?leave a comment