A Brief Introduction to the World of Christian Persecution Headlines August 26, 2015 Hemant Mehta

A Brief Introduction to the World of Christian Persecution Headlines

If you’re curious to see how the Christian Right distorts facts in order to demonize atheists, let me give you a couple of examples from just the past couple of days.

1) This is a painting of Jesus that was hanging up at Royster Middle School in Kansas: 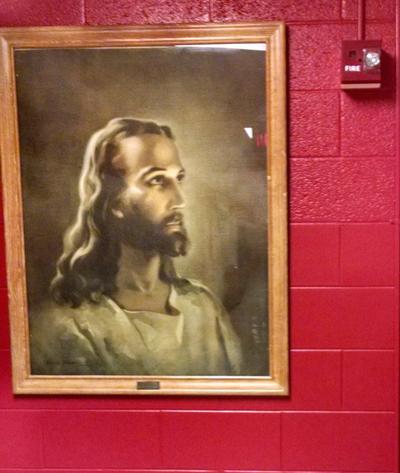 The Freedom From Religion Foundation sent the District a letter saying that the painting was an endorsement of Christianity and therefore violated the Constitution. And guess what? The District took it down.

“I conferred with legal counsel and both of them told me to be in compliance with state and federal law that we had to have it removed,” Chanute Public Schools Superintendent Richard Proffitt told Reuters.

So the Superintendent understood that the District was violating the law and chose to take it down before there were any serious problems.

Now here’s the headline from The Christian Times:

Forced! As if atheists came there with weapons in hand. This wasn’t forced. FFRF merely reminded the District that it was in violation of the law, and the District agreed.

“Forcefully removed”! Like we came there and ripped it down!

(Also, let’s all shed a tear for the poor solitary Christian who’s upset about this…)

2) FFRF also sent several letters to law enforcement agencies where “In God We Trust” stickers were slapped on the vehicles. The letters urged the department heads to remove the stickers because they were promoting religion… and that’s about it.

Because it’s also our national motto, there’s little the courts can do to facilitate this. So a gentle nudge is really the most we can do.

So what did the conservative Global Dispatch run for its headline on the story?

Who knew FFRF was suing over this?! Not them, I assure you.

Part of this is just irresponsible journalism. But it’s also how these people operate. FFRF is a group that defends the Constitution. Since that doesn’t sound nasty enough to stir up gullible Christians, the writers have to blow the truth out of proportion.

If only God issued some Commandment telling Christians not to lie…

August 26, 2015
This Portrait of Jesus Has No Business in a Kentucky Courthouse
Next Post

August 26, 2015 Mormon Church: We'll Keep Working with the Boy Scouts Since They'll Let Us Reject Gay Leaders
Browse Our Archives
What Are Your Thoughts?leave a comment