The Fringe Conspiracy Theory We’re Asked to Respect (A Parable)

You’ve probably heard of the small conspiracy theory group that’s dedicated to spreading the news of an unimaginably elaborate hoax — supposedly the largest conspiracy ever perpetuated on humanity. The group, known as Electricists, claims that electricity is an invention of the government that doesn’t occur in nature and isn’t what “they” tell us. 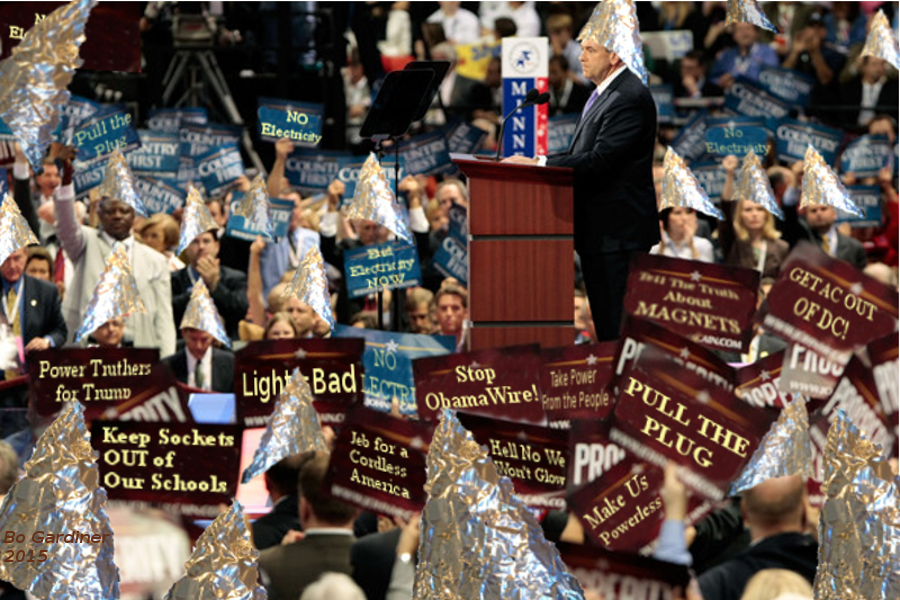 Ions, the Electricists teach, don’t naturally travel along conductive paths; magnetic fields don’t naturally form around such currents. It’s all controlled by central computers to mimic that appearance as camouflage for electricity’s true nature: the controlled flow of instructions directly into our brains to control humanity.

All electrical wiring and appliances in our homes, businesses and public areas have been designed by the government with the primary purpose of mind control. It’s motivated by a hatred of natural human goodness and happiness, to reshape us as soulless, miserable, immoral creatures that will do the liberal elite’s bidding.

Electricists aren’t physicists, medical scientists, or electricians. They have a few websites where they call themselves “electricity scholars.” They proudly credit all their science, medical, electrical, and wiring knowledge to a single book, Cosmic Power, a collection of folk superstitions written many centuries before we had harnessed electricity.

Electricists believe that all the world’s electricians, engineers, general contractors, appliance manufacturers, doctors, and scientists are part of the deception. They are unable to explain how millions of people from so many different walks of life, from every nation, could be in on such a vast conspiracy without proof leaking out. Why do so many deceive, according to Electricists? Many are government shills and deliberately lying. Many mindlessly obey out of fear of government retaliation. Others are just so biased by their own blind faith in government, or their hatred for human goodness, that their work is meaningless and untrustworthy. The rest are unintelligent, incompetent, or insane.

Real electricity experts and the rational public, of course, chuckled at such a wacky fringe conspiracy theory, dismissing believers as a few harmless cranks. But the Electricists gained followers who decided they and their children should get most of their education from Cosmic Power. Today, they homeschool their children in electricity-free homes, refusing to allow them where electricity is present or to associate with non-Electricists. They build Electricist Museums with bizarre exhibits of children happily playing in the rain as lightning bolts bounce off them harmlessly, proving there’s no naturally-occurring electricity.

Unfortunately, of course, some Electricist fundamentalists encourage their children to play outside in electrical storms as a teaching tool. There have been some tragic results, but parents have won special legal exemptions that respect Electricists’ right to raise their children according to their beliefs. Not only conservatives, but liberals, too, now support such exemptions. Because all beliefs must be respected.

Electricists now apply for government tax subsidies to build Electricist universities and museums for the public… and win them. They invite public schools to bus their children to Electricist Museums… and the buses roll. They paste stickers reading “Electricity Science” on their books to cover the old “Electricism” title, tricking many public schools in poorer areas with inadequate oversight into buying them for their classrooms.

Republicans soon realized, of course, that Electricist anti-government paranoia serves their small-government goal beautifully. In recent presidential campaigns, nearly all Republican candidates have announced they’re Electricists. The remaining one or two deflect, saying a candidate’s beliefs about electricity aren’t relevant to a president’s qualifications. The latter content themselves with dog whistling a few nasty jibes about immoral electricians while calling for schools to teach the electricity controversy.

The science-oriented public is admonished by leaders and media pundits that it’s intolerant and disrespectful to use a person’s electrical beliefs as evidence that he or she would be a poor leader. When a scientist, doctor, or electrician publicly states that Electricism is insanity that contradicts all evidence, and that Cosmic Power is bad science, they’re targeted with personal character attacks that question their agenda. Most decide it’s safer to stay out of it and not comment.

Such absurdities could never happen in the Age of Information.

August 25, 2015
Episcopalian Mea Culpa for Role in Slavery Misses the Mark
Next Post