If you had a chance to ask Hillary Clinton any question at a political rally, what would you ask? (Okay, okay, we both know you’re not allowed to ask the first 12 questions that come to your mind. But after that.)

Daniel Little attended a town hall meeting for Clinton in Las Vegas last week and decided to get her thoughts on church/state separation. 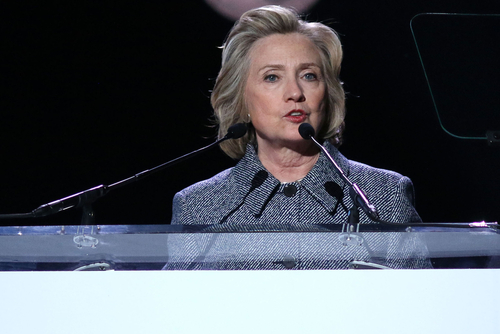 There’s no video available, but you can hear the audio on C-SPAN:

Little: Hello. My name is Daniel Little and I’m at CSN currently — the College of Southern Nevada. I’m a current political science major. And I’m a part of the Secular Student Alliance. Have you heard of that? Okay, basically, it’s a group of freethinkers and skeptics in schools. And currently — there’s a little fact here for you — in a few states, their Constitution has it written… that it is illegal for a nonbeliever to hold public office. With that, I wanna know: What are your current opinions about the separation of church and state.

Clinton: Well. I am very supportive of the separation of church and state. I think it’s good for both the state and religion. And we have so much diversity of thinking in the country, and part of the reason why this American experiment has lasted is because there’s a lot of different ways for people to express themselves, to believe what they want to believe, or choose not to believe, so I think the separation of church and state has served us very well, and I will certainly defend it.

(I should point out that while several state constitutions explicitly ban non-believers from holding public office, none of those laws can be enforced. They’re just relics that the states’ legislators haven’t formally discarded yet.)

As for Clinton’s answer, it’s not a surprise that the Democratic frontrunner would defend church/state separation, but it’s still nice to hear. That said, I’m sure someone like Sen. Ted Cruz could easily have given the same answer.

None of that is Daniel’s fault. He asked a fair question and reminded Clinton, at least for a moment, about all those non-religious voters out there. We could use more students like him.

I asked Daniel if he got the answer he wanted from Clinton and this is what he told me:

I did get the answer that I wanted, for the most part. I like that she is a strong supporter of the separation of church and state, but she also said that the separation has served us well. I agree that is has served us well, but there are flaws in some policies that have been a disservice to us, in which I would have liked for her to mention (like how I mentioned at her rally that several states have laws that make it illegal for a nonbeliever to hold for public office). She tried to stay a bit more neutral with her answer, which is understandable at this point in her campaign.

Did Daniel at least get some positive feedback from the crowd?

The feedback from the audience seemed greatly mixed. After I completed the question, the audience did not start clapping and cheering, like the they did for every other question before and after mine. The audience seemed like they gasped/sighed a bit before some people started clapping. When Hillary finished her question, only a few people (I am guessing around 25% of the audience) started clapping before she quickly went to the next question. Actually, the person with the next question said, referring to Hillary, “thank god she is here.” A majority of the audience clapped for that. When the rally was done, a few people complimented my question.

He deserves the compliments. If you’re planning on attending a rally for any candidate, and you get a chance to ask a question, consider asking them about these issues, whether or not their responses are evasive.

August 25, 2015
Why is This Principal Praying with Her Students Around a Flagpole Before School?
Next Post