A terrifying video began circulating on Arab social media over the weekend of a preschooler dressed in Islamic State garb, confidently wielding a hunting knife as he beheads a white teddy bear. 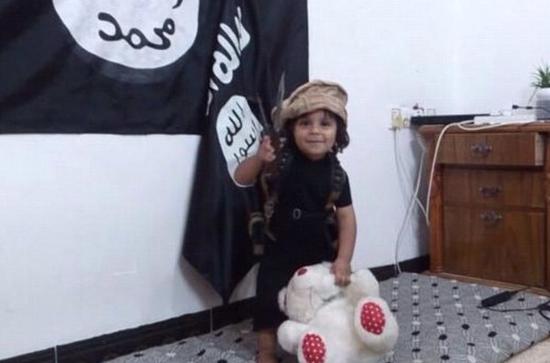 The Daily Mail reports that the video is believed to have been released by ISIS, keeping with their theme of propaganda videos showing children being trained as fighters.

The child looks to be barely three years old and has a sweet smile. If only it wasn’t the result of a joyful slaughter. He enters the room, charges at a teddy bear seated under an ISIS flag, and begins to saw at the plush toy’s neck. Halfway through, he pauses, and the man behind the camera yells, “Takfir!” — an Arabic term used to describe apostates. The boy then returns to the beheading, before standing in place holding the knife in the air. You then hear “Allahu Akbar!” from the man holding the camera.

I want to question the validity of the video, but given how disturbing it is, I have little doubt. That said, the Daily Mail says it has not confirmed the origins.

August 24, 2015
What Else Can We Learn from the Atheist Prison Data?
Next Post