Did you hear about how the stock market took a huge dive this morning?

If you didn’t, that’s okay. We have Pat Robertson around to explain why it happened. It involved President Obama, Planned Parenthood, and whatever else Robertson spouts out when he can’t think of anything logical to say. 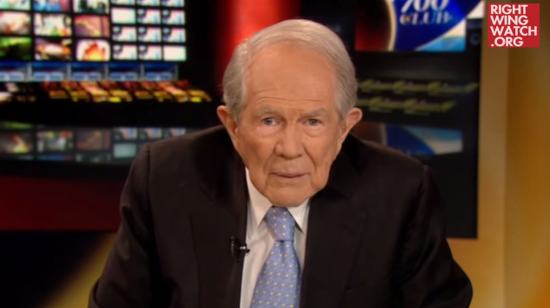 That organization [Planned Parenthood] is an absolute monstrosity. To take your money and my money, which the government extorts from us every year in the form of taxation, is nothing short of tyranny…

… The President has basically said if you take that out of the budget… I will shut the government down. now, that’s how strong he feels about funding the murder of unborn babies…

… We will pay dearly as a nation for this thing going on. And possibly if we were to stop all this slaughter the judgment of God might be lifted from us. But it’s coming, ladies and gentlemen. We just had a little taste of it in terms of the financial system, but it’s going to be shaken to its core in the next few months, years, or however long it tastes and it will hurt every one of us.

(Just to be clear, Planned Parenthood receives no federal funding for abortion services.)

I guess if the market goes back up, that means God’s giving us a celestial thumbs up on abortion?

Oh look. It’s coming back up. I guess God wasn’t angry after all.

August 24, 2015
Candidate in Nashville Mayoral Race Accused of Being an Atheist by Opponent's Campaign
Next Post