It wouldn’t be surprising to see a wall of “prayer requests” like the one below at a local church: 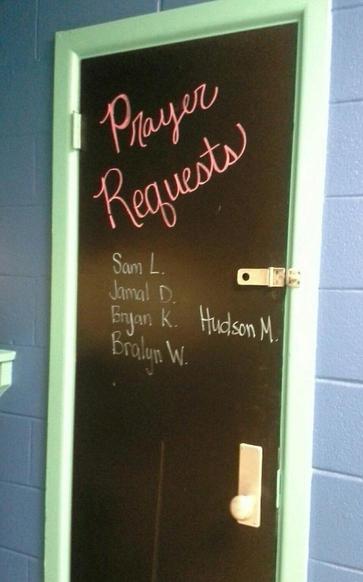 But let’s admit this has no place in a public school.

The American Humanist Association’s Appignani Humanist Legal Center says the board in the picture exists in a classroom at Oak Grove Middle School in Purvis, Mississippi.

According to the letter, an eighth grade math and homeroom teacher created a “Prayer Requests Board” prominently displayed in her classroom. After a student took a picture of the board, the teacher confronted the student, accusing the student of disrespecting the teacher’s religion. The teacher refused to remove the board and insisted that she would keep it in her classroom, even if she had to remove the word “prayer.”

“Students have to right to learn free from bullying by teachers with religious agendas,” said Roy Speckhardt, executive director of the American Humanist Association. “A teacher who insists upon endorsing prayer in class is disrespecting her nonreligious students and students of minority faiths.”

Besides the sheer unconstitutionality of it, it also doesn’t really help anyone. Turns out saying some magic words followed by someone’s name has about as much effect as, well, Mississippi’s sex-ed curriculum.

If students are having problems that the teacher believes deserve prayer, there are all sorts of ways to handle it: She can talk to the students privately. She can call their parents. She can let the social workers know about it. And you know what? She is welcome to pray for them on her own. She doesn’t need to drag the class into her way of mythological thinking.

The AHA is asking for a quick removal of the board, an assurance it won’t happen again (in any other form), and a reminder to go out to all teachers that the classroom is not a place to proselytize. No lawsuit. No money. They just want the District to do the right thing.

August 24, 2015
John Oliver Explains How LGBT Discrimination is Still a Major Problem at the State Level
Next Post