Cindy Jacobs, the co-founder of Generals International, is a faith healer who works miracles. Or so she claims. Last time we mentioned her, she was supposedly turning metal into bone.

But her latest miracle is really something. Jacobs says she helped someone grow three inches in an instant, all because of her faith in God: 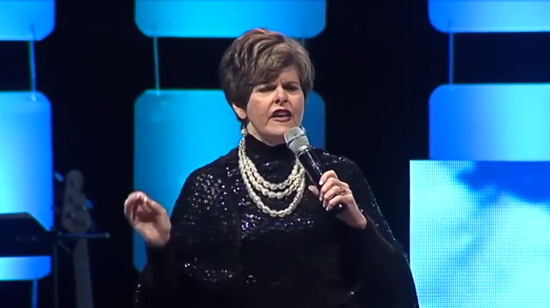 One very sweet miracle was through a word of knowledge when I said, “There is someone here, and you are shorter than you are supposed to be.” I went on to explain — because lots of people wanted prayer to grow!—that this would not be someone who had lost height, but rather, someone who was told by doctors that they should have grown taller than they did.

Finally, the right one came forward — a young woman. She was weeping and weeping, and at last we understood that she had suffered a lot of teasing from her lack of height. I had not prayed for someone to grow instead of to regain height, but I knew it was from the Lord. In faith, I put my hand about three inches above her head, and she shot up until her head touched my hand!

I would love to, Cindy. We would all love to see her face.

But — wouldn’t you know it — there’s no video of this “miracle” happening. Or pictures. Or medical records. Or the woman’s name. Or even a goddamn tape measure with tick marks three inches apart.

Maybe she knew we’d be skeptical. So before we could dwell too much on those silly “facts,” Jacobs had already moved on to her next miracle:

Then I said, “Who has never seen a miracle!” One hand shot up quickly, and I invited her to come forward. I said, “Now kneel down and command the leg to grow.” At first she was hesitant, but then she did. And, of course, the leg grew! We went through this spiritual exercise three more times, and the last one to pray for the leg to grow was only 12 years old!

You know, after the first leg expansion, you’d think somebody would have had the sense to break out an iPhone…

(Maybe if the rest of us pray for a miracle, Jacobs will finally provide proof of her powers.)

Her ministry is taking donations, by the way. Jacobs can help people get taller instantaneously, but somehow, she still hasn’t figured out how to make her wallet grow on its own.

(Image via YouTube. Thanks to Kyle for the link)