Candidate in Nashville Mayoral Race Accused of Being an Atheist by Opponent’s Campaign August 24, 2015 Hemant Mehta

Earlier this month, no candidate won the majority of votes in an election to become the next mayor of Nashville, Tennessee. So on September 10, there will be a runoff election between the top two vote-getters, Megan Barry and David Fox.

What do you do to get a leg up over your opponent in a tight race? If you’re Fox, you apparently have volunteers at your call center suggest to voters that Barry is an atheist:

[Barry] called on her runoff opponent, David Fox, to repudiate the spread of that message, which her campaign said has spread by a phone banking effort where callers warn that she doesn’t believe in God.

Earlier today, Barry gave a speech at a prayer breakfast held at the Jefferson Street Missionary Baptist Church. She used some of her time clarifying her beliefs — she’s a Christian; she just doesn’t make a big deal about it:

“There have been a lot of comments from my opponent and a lot of really not nice things said about me,” Barry said. “So let me just start off with, I’m a Christian.

“I was raised as a Catholic, but my faith, which was always very personal to me, has suddenly become a public conversation, which has made me uncomfortable.”

“In prayer and in Jesus, we are all together in this,” she said.

It’s not the first time someone’s purported atheism has been used in a smear campaign against them. 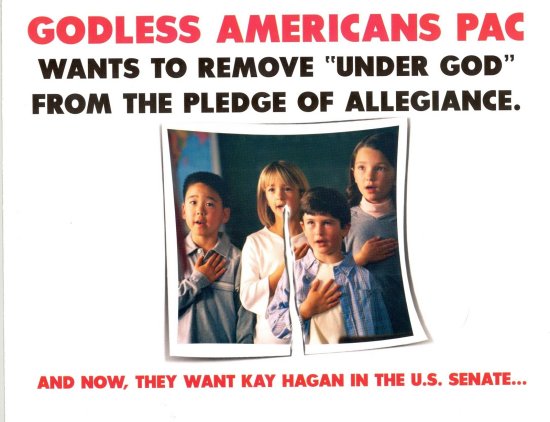 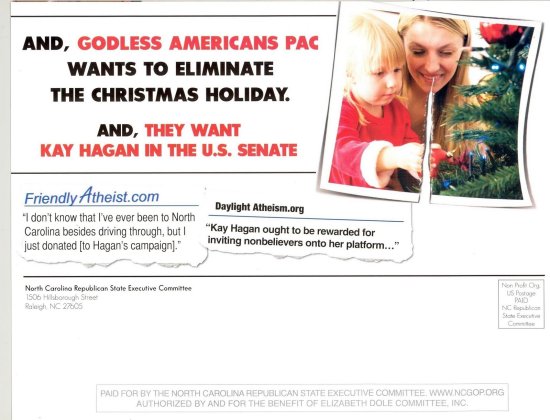 They ran a commercial, too:

(It didn’t work. Hagan went on to defeat Dole.)

Last year, in Austin, Texas, City Council candidate Laura Pressley highlighted the supposed atheism of her opponent Gregorio Casar in an effort to discredit him:

(Casar was actually a Catholic, but the attempted smear didn’t hurt him, either. He went on to defeat Pressley in the election.)

We all know politics is dirty. But if Fox’s campaign, or a PAC on his behalf, is trying to use Barry’s supposed atheism as a reason not to vote for her, it’s a despicable move. Not just because he’s lying about his opponent, but because he’s throwing all of us under the bus along the way.

I reached out to his campaign to find out if they sanctioned these phone calls. If they didn’t, Fox still ought to condemn such actions. (I was going to say “smears” but calling someone an atheist isn’t an insult.)

It goes without saying that the religious beliefs of a candidate should be irrelevant if they make policy judgments based on evidence and experts. There are plenty of religious politicians out there who know how to set aside their personal beliefs in order to do what’s best for all the people they represent. Atheist candidates — the few that are out there — would hopefully do the same.

If you have to resort to calling out the religious beliefs of your opponents, it’s just a sign you have nothing substantive to criticize them about.

***Edit***: I should have mentioned that Tennessee is one of the few states that bans atheists from holding public office in its Constitution. It’s not enforceable in any way, but it’s right there in Article 9, Section 2:

August 24, 2015
I Could Binge-Watch This Series About an Atheist Coming Out on Her 18th Birthday
Next Post

August 24, 2015 Pat Robertson: Today's Stock Market Crash Happened Because God is Angry About Abortion
Browse Our Archives
What Are Your Thoughts?leave a comment