Long-term readers of this site are undoubtedly aware of Christian pseudo-historian David Barton. He makes up his own version of history, full of Jesus and light on facts, and markets it to Christian home-schoolers and the Fox News crowd. 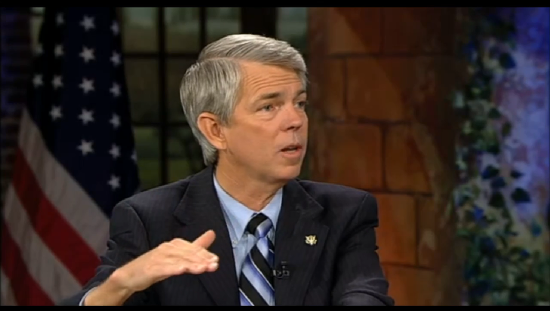 In Julie Ingersoll‘s new book Building God’s Kingdom: Inside the World of Christian Reconstruction, she gives a history of his influence.

Salon has the excerpt:

A self-styled historian with no real academic credentials, Barton went on to build an extensive collection of primary source documents from America’s founding era and write several “Christian American history” books that argue that the founding fathers intended America to be a Christian nation and that argue for a Christian reading of the Constitution they wrote. This work has shaped a generation of Christian school and homeschool students.

Despite being roundly rejected by scholars, Barton claims to be a “recognized authority in American history and the role of religion in public life.” For example, an amicus brief filed by Wallbuilders in McCollum v. California Department of Corrections and Rehabilitation claims Barton works as a consultant to national history textbook publishers. He has been appointed by the State Boards of Education in states such as California and Texas to help write the American history and government standards for students in those states. Mr. Barton also consults with Governors and State Boards of Education in several states, and he has testified in numerous state legislatures on American history.

That’s just scratching the surface of what he’s been able to do. He ought to be an embarrassment to Christians for his faulty scholarship; instead, the Right embraces him as a visionary.

Read the full passage and you’ll see why he’s so frustrating to scholars who study this history for a living.

August 25, 2015 How Do You Know Your Atheism Isn't Just a "Phase"?
Browse Our Archives
What Are Your Thoughts?leave a comment