As much as I’ve written about The Satanic Temple, I won’t claim to understand their beliefs other than to say Satan has little to do with it. I just know that whenever they show up, the Religious Right squirms because they still haven’t figured out how to respond to a religion they just don’t agree with.

Yesterday, several anti-abortion groups staged protests outside Planned Parenthoods all across the country. I’m sure they expected to have shouting matches with pro-choicers… but at one location in Michigan, the protesters were dumbstruck when local Satanic Temple members came by to stage a unique counter-protest of their own involving several gallons of milk being poured on two women: 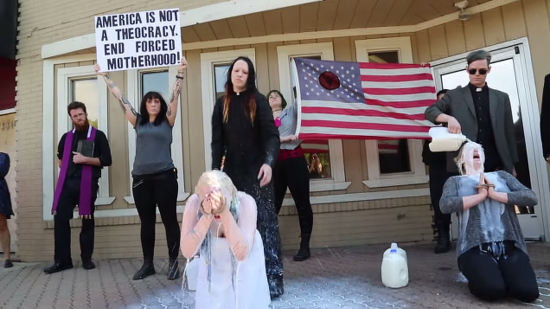 Whatever it was, it made the protesters angry and it got news coverage. So I guess mission accomplished?

Jex Blackmore of the Temple, said “we opted to do a form of political theater because we feel very much that is what the opposition is doing. Milk to us is symbolic of motherhood and we feel clergy is promoting a form of theocracy in forcing women to adhere to their ethical guidelines.”

August 23, 2015
How is Your Atheist/Christian Relationship Going?
Next Post