One Dad’s Perfect Response After His Son Chooses a Doll at the Toy Store August 23, 2015 Tracey

A boy named Azai received two identical gifts at his birthday party, so his dad Mikki Willis took him to the toy store in order to exchange one of the presents for something he didn’t have.

That put his father in a predicament: How should he respond? It’s a strong gauge of just how far a parent is willing to accept his son’s decisions when they break the typical gender norms.

Willis recorded his response in the parking lot outside the toy store: 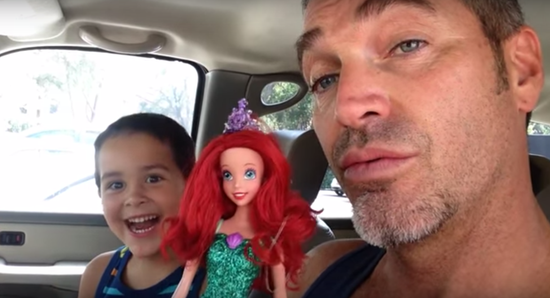 After Target announced they were scrapping the gender-specific signage in their toy department, many conservatives whined and threatened boycotts. But the people supporting Target’s decision seem to be getting the upper hand.

Keep drowning out the hate, Mikki and Azai.

August 23, 2015
Islamic Lecturer Hamza Tzortzis Explains Why His Data Was Found in the Ashley Madison Hack
Next Post

August 23, 2015 Friendly Atheist Podcast Episode 69: Dan Barker, Co-President of the Freedom From Religion Foundation
Browse Our Archives
What Are Your Thoughts?leave a comment