Following revelations that he had a paid account on cheating website Ashley Madison, Christian YouTuber Sam Rader responded to the claims yesterday by saying it’s all true, but it’s all good because God forgave him. As he spoke, his wife Nia smiled and nodded alongside him: 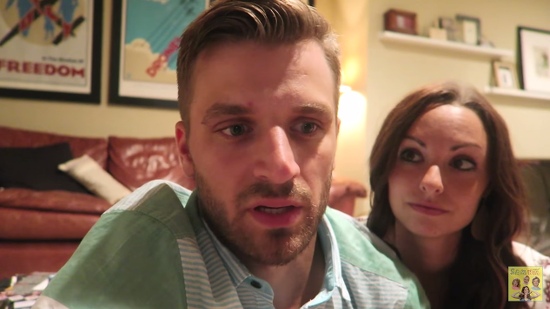 This is an issue that is in our past. This was before I got onto YouTube… This was brought to my wife’s attention. She has forgiven me for this mistake that I made in opening the account. I have sought forgiveness to God and He’s forgiven me, so I have been completely cleansed of this sin.

I asked God to confirm that He forgave Rader. He didn’t get back to me.

But it’s mighty convenient, isn’t it, that God managed to make things right just as the couple’s YouTube channel was taking off and the cash was rolling in?

(Just once, I would love to see Christians say they asked for forgiveness and God responded with a “No.” But God’s their permanent Get Out of Jail Free card, so that will never happen.)

Can’t wait to see which Commandment Rader breaks next!

I still stand by what I said the other day. As far as Christians go, Rader is no Josh Duggar. He’s a practicing Christian and loves to tout his faith, but it’s not like he’s spent his life fighting against marriage equality. If there’s evidence of that, then by all means, let’s all have a go at him. Until then, I’m just not feeling the same sense of schadenfreude.

August 23, 2015 Jesus Pets a Jackalope on Billboard Advertising South Dakota Atheist Conference
Browse Our Archives
What Are Your Thoughts?leave a comment