This past May, teacher Robert Basevitz filed a lawsuit against the Fremont RE-2 School District in Colorado — his own District — documenting all sorts of instances in which District officials crossed the line and treated the local high school as an extension of a local church. Let me point out a couple of the violations in particular: 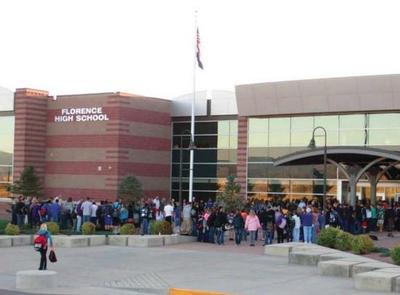 1) There was a Christian group on campus that was started by Pastor Randy Pfaff — not students — and which included Principal Brian Schipper as one of the group’s advisors.

2) There was a gathering around the flagpole for Christian prayers every morning (with the participation of the pastor and the principal) that was announced over the school’s loudspeakers and blocked the entrance to the school.

Obviously, these are problems. But the most important ones right now are that you can’t have a Christian group at a public school that’s not student-led. That means the pastor can’t lead those prayers either.

The two sides agreed to a settlement last month (with Basevitz receiving $50,000 from the District) and it included this clause:

Student-led religious groups must be genuinely student-led. District employees may attend such religious groups as observers only, to ensure that school rules are being followed. Non-school persons may not direct, conduct, control, or regularly attend activities of student groups.

But now that’s school’s back in session, guess what’s happening?

Pastor Randy Pfaff is still there, leading the Christian group in morning prayers by the flagpole, explicitly breaking the agreement.

“It’s short, 20, 30 seconds and then they go in and then we wait for another group to come,” said pastor Randy Pfaff.

The District has not said whether Pfaff’s involvement at the prayer gatherings before school is allowed under the settlement. Pfaff said he will continue to show up to pray at the flag pole until the District says otherwise. Superintendent Rhonda Roberts did not return several phone calls by News5 on Friday.

The District did say otherwise. That’s how the settlement works!

Maybe it’ll take another lawsuit to remind the District of the rules it agreed to follow (or, in this case, enforce). In any case, Pfaff has no business being on school property to conduct church business or pray with students. They’re teenagers. If they want to pray at the flagpole, I’m pretty sure they can handle that one on their own. They don’t need an adult explaining how to hold hands in a circle or speak to someone who’s not listening.

Superintendent Rhonda Roberts didn’t respond to a local news channel on Friday, but if she doesn’t take swift action, the District is bound to lose even more money for the irresponsible way it’s handling this issue.

August 22, 2015
A Compilation of James Randi's Best Arguments and Comebacks
Next Post