Melissa Klein and her husband Aaron are the owners of Sweet Cakes by Melissa, a bakery in Portland, Oregon. They’ve been in the news a lot lately for refusing to bake a cake for a lesbian wedding, a decision that eventually cost them $135,000 in fines. They didn’t take a personal hit, however, since like-minded Christians donated more than $350,000 in an online fundraiser for them.

So why are they back in the news? Because they just sent cakes to 10 LGBT-rights groups that say “We really do love you!”… which might be a sweet gesture if not for what else was included in the gift: 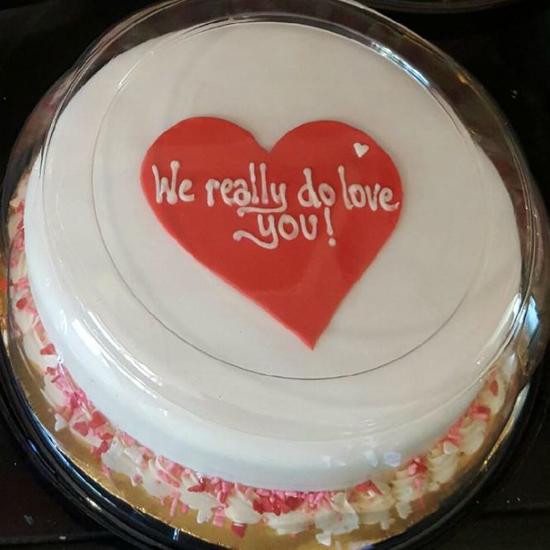 “Our purpose is to express our love for them as a Christian,” she wrote. “We don’t hate them. We also included in the package the movie Audacity. I feel it is a well done movie that shows what being a Christian is about. My hope is that they will watch it and maybe just understand our heart. We want to show them that it’s not about not serving them it’s about not being able to partake in an event.”

Audacity, of course, is Ray Comfort‘s movie about how all homosexuals need to be “saved” before they’re doomed to a life of eternal hell.

In other words, the Kleins are just as awful now as they were before. They love you… but only if you change your sexuality. Or remain celibate.

Maybe someone should send them a cake along with a copy of Christopher Hitchens‘ God is Not Great to see how much they appreciate it.

At least one of the LGBT groups had the right reaction:

“You can’t one day send out a batch of cakes that say ‘We really do love you’ and the next day stand at a podium and advocate for discrimination against LGBTQ people,” she said. “This gesture is not about those cakes. It’s about standing for the Oregon values of fairness and inclusion and that’s what BRO stands for.”

The Kleins don’t care. They got the publicity they wanted. And, oh, by the way, their fundraiser is still open, which is totally coincidental, I’m sure.

(Image via The Oregonian. This article has been updated since it originally went up.)

August 22, 2015
Slovakia Will Welcome 200 Syrian Refugees Over the Next Two Years… But Only if They're Christian
Next Post