Your high school Spanish teacher lied to you: After you die, those foreign language skills will be useless! At least if you agree with Pat Robertson.

In response to a woman who claims to speak 26 languages and wants to know which ones will be useful in Heaven, Robertson said on The 700 Club that none of them will matter since the angels communicate through your mind: 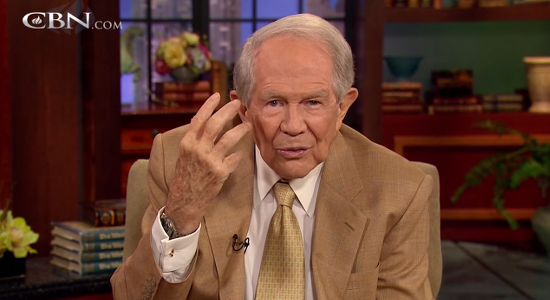 Listen, I don’t think you’re going to be talking language. You’re going to be talking thoughts. And the thoughts will be communicated without being verbalized. I don’t think that we need to express it, but the mind will communicate the thought. I mean, [we’re] spiritual beings and, in Heaven, we’ll be in the presence of the Ultimate Spirit, and all wisdom and all knowledge will be laid out before Him, and the minute we think something, it’ll be done. I mean, it’s gonna be a whole different experience, so you don’t have to worry about whether you’re gonna be using Korean or Japan — Japanese…

Language, it won’t count! I mean, it’s gonna be the language of the Spirit. We will communicate with our minds, and the minute we think a thought, it’ll be there, so we won’t have to verbalize it.

This, pulled from the Gospel of Pat Robertson’s Ass.

It would be hilarious, though, if God only spoke in Arabic…

August 21, 2015
Even Locals Are Mad at California School Board Member Who Ranted Against Gay Marriage at Meeting
Next Post