Following the revelation that Josh Duggar had paid accounts at cheating website Ashley Madison, it turns out another well-known Christian has also been exposed. 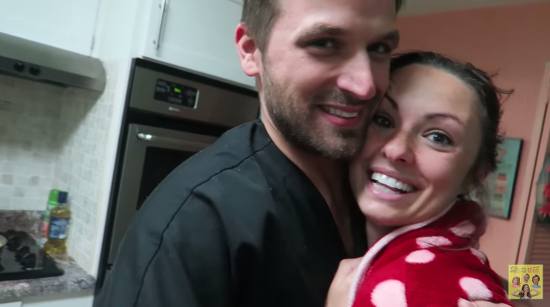 Sam Rader and his wife Nia (above) are the telegenic Christian YouTubers who have made headlines lately for their viral pregnancy announcement, which was followed just days later by a miscarriage announcement (which makes you wonder if they’re just faking it for the hits).

But they’re unabashedly (and, depending on your perspective, annoyingly) Christian. They talk about it all the time.

Which may be why new reports are confirming that Sam Rader also had a paid account on Ashley Madison. His name, his city, his website, and his zip code are all linked together with a paid membership in the recently-hacked data.

Who is Sam Rader? A guy who promotes a mostly inconsequential version of Christianity. His family goes to church. They believe what they’re told to believe.

Maybe you’ll argue they’re anti-gay. In a video posted last month, where the couple said to their daughter that gay marriage was wrong, Sam deleted the video, reposted it without that segment, and said the next day:

We owe everyone an apology for yesterday’s comments on gay marriage. The footage has since been removed, but for those of you who didn’t see it, we made a joking matter out of homosexuality. The footage was entirely my fault (Sam), and I regret any hurt that I may have caused; the idea sparked from a segment I saw on Jimmy Kimmel and it went awry. I hope you all will accept my apology.

In that video, they also explain: “We are Christians. We believe in everything the bible says, and we believe that god created man and woman to be together.” Okay. Fine. But when people called them out for suggesting gay marriage was wrong, they didn’t double-down on it like Josh Duggar would have. They apologized because that really wasn’t their intention. If you take him at his word, Sam was making a joke, not a political statement.

What you have is a couple that is almost generically evangelical. They may not support gay marriage, but that’s a far cry from saying it’s harmful or damaging to society. Odds are they’ve never had to think about it much. It’s what they hear from the people around them so they just assume it makes sense and adopt the belief themselves.

Is that bigotry? Meh. It’s wrong, but given the sort of awful active bigotry we see from Christians these days — including from Republicans running for public office — I would place the Raders’ misguided beliefs about sexuality in a very separate category.

That’s why Sam Rader’s “outing” bothers me in a way Josh Duggar’s didn’t. If you want to blame him for cheating (though there’s no evidence he met anyone from the site), okay, but what about everyone else? If you want to blame him for hypocrisy, you have to stretch a bit to do it. Yes, he marketed himself and his wife and kids as wholesome and “Christian”… but I would feel more comfortable with people ruining his life if I knew he was doing the same to others.

Just because he’s a public figure isn’t reason enough, in my view, for him to get this sort of treatment that’s typically reserved for politicians and pastors. If people are getting joy out of this particular revelation, it’s probably because the couple is so damn “perfect” otherwise.

People may justify writing about the scandal by saying the couple is explicitly Christian… but I suspect this story would be out there on gossip sites even if they never brought up their faith at all, only because they’ve been everywhere over the past month.

I’d love to know from commenters where you draw the line for these sorts of revelations. Should any public figure in the hack be outed? Just the obvious hypocrites? All Christians?

I’m not sure what the line is myself. But I’m not convinced that Rader is on the “needs to be exposed” side of it.