Last month, after a long stint in prison for tax fraud, Creationist Kent Hovind was set free (though he had to spend a month under house arrest and will be on “supervised released” for the next three years).

Since then, he’s been posting videos on YouTube promoting his usual Creationist schtick: 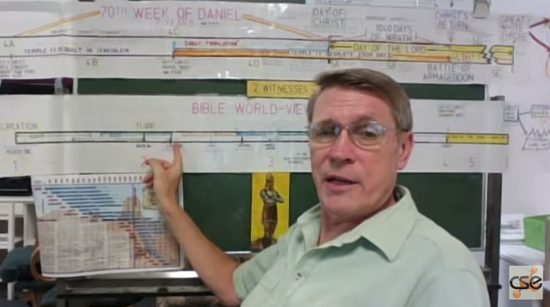 His partner in crime, however, isn’t getting off so easy:

On Friday, Paul John Hansen, a church trustee and co-defendant of Pensacola evangelist Kent Hovind, was sentenced to 18 months in federal prison for criminal contempt.

In March, a federal jury convicted Hansen on two counts of contempt: One for mailing a notice that interfered with government efforts to sell church land to settle Hovind’s tax debts, and another for failing to comply with a subpoena ordering Hansen to appear in Pensacola last year.

Hovind and Hansen’s defenders have often said the two were victims of anti-Christian bias, but the Judge put that to rest right away:

“There is little that is more threatening to the fabric of society than someone taking action to thwart or ignore the law,” the judge told Hansen. “… You’re not special. You’re subject to the same laws as everyone else in this courtroom… that’s all this case is about, pure and simple.”

“You’re not special.” That’s, like, the meanest thing you could possibly say to someone who prides himself on being Persecuted While Christian.

It seems that Hovind will invite Hansen to continue working with him on his ministry once he’s released.

“I would trust you completely,” he told Hansen from the stand. “I think you are a Godly man, and if I could give my opinion…you should go home today.”

Going to jail for contempt. That may be the least embarrassing thing to happen to a famous Christian this week.

(Thanks to Tom for the link. Portions of this article were published earlier)

August 21, 2015
Pastor Lashes Out at City Council Member for Saying Churches Shouldn't Be Used as Polling Places
Next Post