When God Couldn’t Save His Life, Siri Stepped In August 20, 2015 Hemant Mehta

When God Couldn’t Save His Life, Siri Stepped In

Sam Ray, a recent high school graduate, was working underneath his truck earlier this summer. Suddenly, the jack failed and he was trapped below the 5,000-pound vehicle.

Ray called out for God’s help: 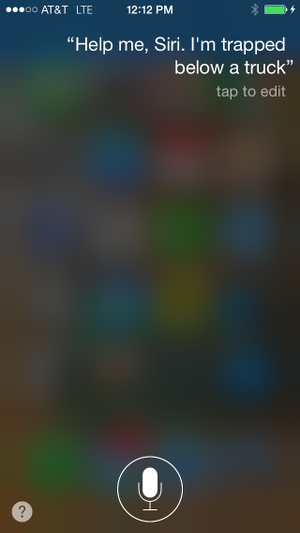 “I just kept praying out loud, ‘Lord, get me out of this,’” Sam said. “I kept reciting Philippians 4:13, ‘I can do all things through Christ who strengthens me.’”

Somehow, the truck didn’t budge. But then Ray remembered he had an iPhone in his back pocket and he was able to maneuver himself to get Siri’s attention:

His arms were trapped, making it impossible to access his phone, but he was able to push up on his hip to activate Siri in his pocket and request that his phone call 911. After several attempts, he heard a voice on the line and realized he had gotten through.

“When I heard a woman talking from inside my pocket, I just started shouting,” Sam said. “I didn’t know if she could hear me or not, but I heard her say that help was just around the corner.”

So Siri did what God couldn’t. One of the nurses who traveled with Ray to the hospital had the best line:

“We’re always concerned with crush injuries, and the longer a patient is trapped, the more problems they can have,” said Kirk Krokosky, one of Sam’s flight nurses. “He could have been there for hours, but as fate would have it, Siri was sort of his guardian angel.”

Because who needs the story of Job when you have the legacy of Jobs?

You know how this story ends, though. Everyone is giving credit to the one Guy who doesn’t deserve it:

“We are blessed beyond measure,” Laura said, “It could have been so much worse; I could be burying my son. We’re so thankful that God has allowed us to keep him and that we are allowed to watch him continue to grow.”

Not sure why she’d want to thank the God who let a massive truck fall on her son, but there’s #ChristianLogic for you.