Elderly Woman Robbed and Punched by Attackers at Omaha Church

Ugh… this is just awful. 76-year-old Lucille Morinelli was attacked at St. Cecilia Cathedral in Omaha on Sunday, right before Mass.

22-year-old Wayman Clark and an unknown second assailant worked together to steal her purse and then punch her out. The elderly woman hit her head on a table as she fell down. And it was all caught on camera: 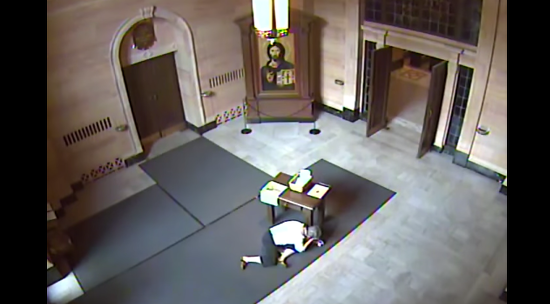 Clark’s mother was also arrested for “harboring a fugitive.”

Even for criminals, it’s pretty despicable to attack an elderly woman at her church. While commenters at one conservative website are making this all about race, at least Morinelli is handling this with grace.

A claimed family member of the victim says that her grandmother has since asked that the public pray for her attackers.

(Thanks to Rebecca for the link)

August 20, 2015
Kentucky Man Arrested After Digging Up Dead Father's Grave in Order to Send Him to Heaven
Next Post

August 20, 2015Vice's Compelling New Interview with Raif Badawi's Wife
Browse Our Archives
What Are Your Thoughts?leave a comment