Pastor Creflo Dollar: If You Don’t See Why I Need a $65 Million Plane, You Just Don’t Get the Bible August 19, 2015 Hemant Mehta

Pastor Creflo Dollar: If You Don’t See Why I Need a $65 Million Plane, You Just Don’t Get the Bible

On Sunday, Last Week Tonight host John Oliver delivered a blistering takedown of televangelists who make tons of money on the backs of their gullible followers. One of the pastors highlighted in the piece was Creflo Dollar who, earlier this year, asked for a $65 million handout so he could buy a plane. (For Jesus.)

While none of the televangelists, as far as I know, have responded directly to the segment, it’s somewhat amusing that Dollar referenced the plane on Sunday morning (before Last Week Tonight aired).

He explained to his congregation that anyone who questions his desire just doesn’t understand the Bible: 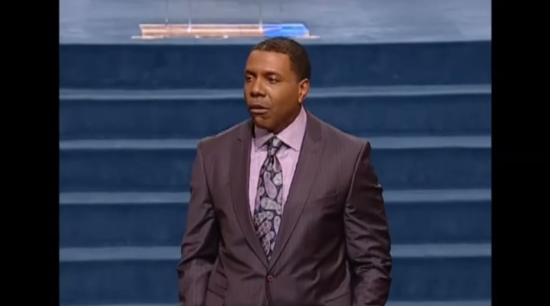 See, don’t get upset when the world says stuff and talk about stuff, and all that. They’re just looking through the wrong lens. They don’t understand.

His argument boils down to nothing more than “Gimme money because the Bible!”

What’s depressing is how that argument is somehow convincing to so many people.

To quote one commenter at Raw Story:

It says right in the bible,

For, lo, the old airplane was found wanting,
Certain luxurious amenities, like a 50″ plasma.

August 19, 2015 Josh Duggar Had a Paid Ashley Madison Account, Says Gawker
Browse Our Archives
What Are Your Thoughts?leave a comment