We know fundamentalist Christian pastors can’t do science. Turns out they can’t do math either.

Pastor Craig Conner of First Baptist Church in Panama City, Florida thinks we could wipe it out entirely if the government would just defund Planned Parenthood… which receives $540 million of taxpayer money each year (none of which goes toward abortions). 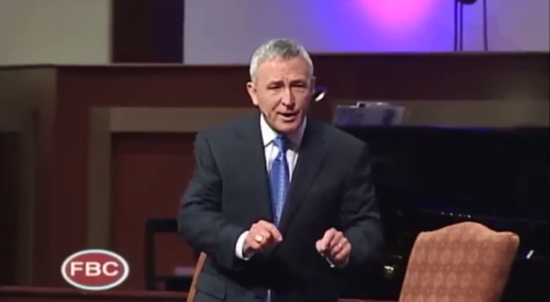 How did we get to the place where the government gives this organization $540 million a year of our money to fund this evil? How did we get there? And we have absolutely no choice in how our money is being spent. Friend, that offends me. I don’t know how it affects you, but that greatly offends me.

And honestly, I was talking to the Lord about this just the other day and I said, “Lord, I can’t continue this. You know, if Planned Parenthood is not defunded, I may just stop paying taxes.” I know I may go to jail for it, but friend, it breaks my heart to know that when I send my check in to the IRS, they are taking money out of my check I send to them, and they are using it for this evil purpose.

And, friend, when I call Planned Parenthood an evil organization, I don’t stumble, and I don’t stammer, and I don’t apologize. I mean exactly what I say.

First of all, we’re not friends, buddy.

The only way Conner’s idea makes any sense is if the government defunded Planned Parenthood for the next 34,000 years. And, by that time, the debt would be much larger, so even that calculation is ridiculously generous.

Maybe he missed school the day they taught math.

(via Christian Nightmares and Bad Preachers)