We can now add atheism to the ever-growing list of things Carly Fiorina knows little about.

Yesterday at the Caucus Candidate Forum Series in Iowa, the Republican Presidential hopeful explained how atheists would be ill-suited for public office: 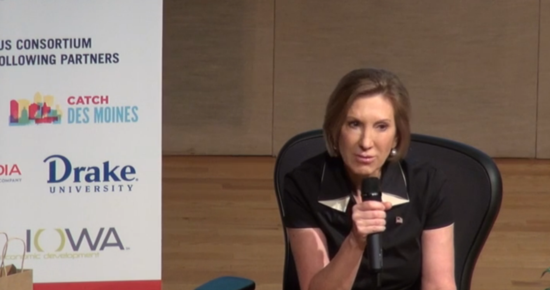 “People of faith, I believe, make better leaders,” Fiorina said during a wide-ranging conversation that also touched on her economic policies and her foreign policy opinions.

“Faith gives us humility,” she continued. “Humility is really important in a leader because it’s humility that causes a leader to say sometimes ‘I must be restrained. … Sometimes I need to seek wisdom and counsel from others, perhaps, for example, citizens of this great nation.’”

The ability to seek counsel from others is certainly an important quality for any leader. But I have no idea how that translates to “believe whatever the voices in your head tell you.” Considering how many of the GOP candidates are running because they think God told them to — and how Donald Trump isn’t one of those candidates — you’d think they’d get the hint. Listen to experts, not God.

I would much rather have leaders who have the ability to ask tough questions, surround themselves by people who will challenge them, and get counsel from those who know what they’re doing.

August 18, 2015
Pat Robertson: I'm Not Psychic. God Just Tells Me Who I Need to Heal
Next Post