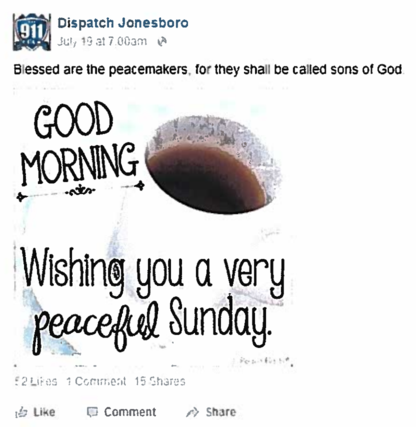 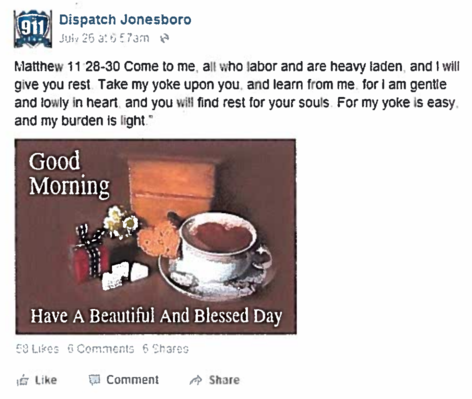 There are more where that came from.

After the Freedom From Religion Foundation warned Mayor Harrold Perrin against using the government page to promote religion, he directed city officials to remove the posts. But now he’s second-guessing the decision:

“At the time, I decided it was better to be cautious and remove the posts until we could look into this issue further,” Perrin said in a statement.

However, the mayor is now seeking advisement from Arkansas Attorney General Leslie Rutledge and says that the city will continue to share “inspirational” posts with residents.

“After further review, I have decided to request a legal opinion from the Arkansas Attorney General as to the legality of putting posts that may contain religious content on city-run Facebook pages. When I took office I swore an oath to uphold the Constitution and the laws of the land. I am committed to ensuring that the City of Jonesboro in all its operations obeys the law,” Perrin said.

This isn’t a decision that requires the expertise of the state’s top lawyer. You can ask a high school senior who wants to go to law school and she’ll answer this one without hesitation.

In the meantime, here’s an idea of what the city’s “inspirational” posts look like:

Someone needs to monitor that page. I promise you the Christian posts are going to return the moment the media stops paying attention to this story.

August 16, 2015
Once Again, a Naked Devil Statue Appears in Vancouver
Next Post