I posted earlier about a Nativity Scene battle taking place in Belen, New Mexico. Mayor Jerah Cordova refuses to take down the government-sponsored Christian display because, he says, it’s part of the town’s history and isn’t at all a promotion of religion.

As if that makes any difference. 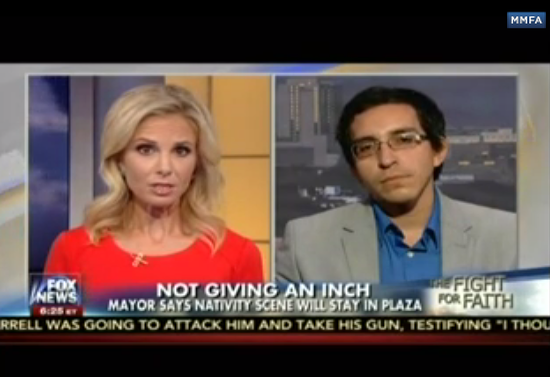 “The war on Christmas typically comes, well, in the winter, near December, but this is coming a little bit early,” Hasselbeck pointed out. “But this isn’t even about a seasonal issue. This isn’t a nativity that comes up for Christmas. This has been part of your people’s history there.”

It’s all too convenient for Hasselbeck and Cordova to use the history defense when there’s no conflict with their faith. If that history included an Islamic reference or included a plaque saying God didn’t exist, you can bet that defense would go right out the window.

Even in a place like Los Angeles, there’s no place for government promotion of religion. This is not an ambiguous church/state separation case. This one’s clear cut. And if Cordova doesn’t fix the problem soon, the people of Belen will have to pay the price for his irresponsibility.

(via Raw Story and Media Matters)

August 15, 2015
Anti-Gay Christian Lawmakers in Michigan Will Not Resign Despite Their Affair and Cover-Up
Next Post