Anti-Gay Christian Lawmakers in Michigan Will Not Resign Despite Their Affair and Cover-Up August 15, 2015 Hemant Mehta

Last week, in the weirdest political sex scandal I’ve heard in a long while, it was revealed that Michigan State Rep. Todd Courser had an affair with the also-married Rep. Cindy Gamrat — both of whom are Christian conservatives fighting for “traditional” marriage. Courser attempted to keep their hookup under wraps by distributing a fake email alleging that he fucked a male prostitute. Because I assume that’s what it says in the GOP playbook somewhere.

It didn’t work. The whole story hit the media. And now there’s a question of what the politicians will do.

Yesterday, Rep. Gamrat issued a public statement (with her husband standing beside her) in which she announced she would not be stepping down. 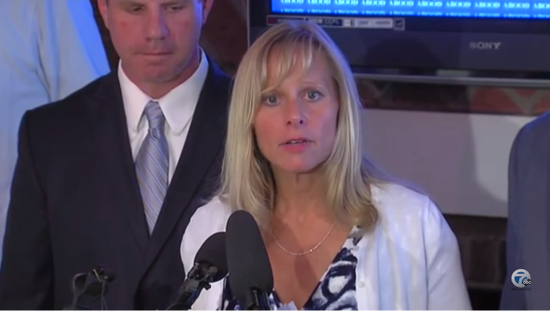 As I said before, I would have much more sympathy for her if she hadn’t spent her career trying to make life harder for LGBT people. It was only a couple of months ago when Courser introduced legislation to make gay unions more difficult by requiring religious leaders (not local government clerks) to sign off on marriage licenses — the bills were supported by Gamrat.

These proponents of “traditional marriage” think they should be forgiven for their affair while simultaneously blaming gay marriage for ruining society.

Courser, by the way, is doing everything he can to distract the public. On Facebook yesterday, he pointed out there was a possible tax increase on the horizon, which for Republicans is the equivalent of yelling “squirrel“:

These people have no shame…