Foundation Beyond Belief Surpasses $2,000,000 in Donations

Foundation Beyond Belief, a group I work with that encourages atheists to give to charity, just announced that it has surpassed $2,000,000 in total donations: 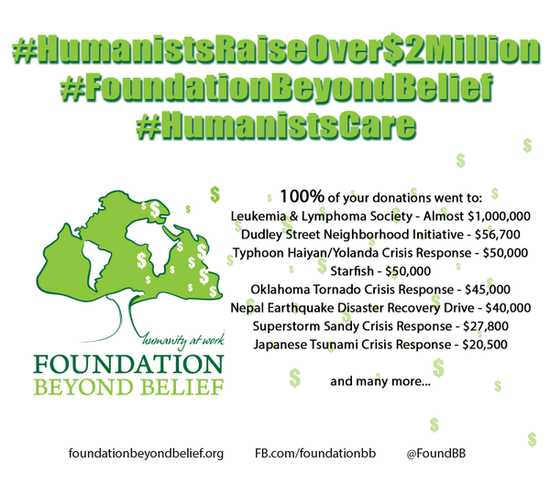 Almost half of that was raised in a nationwide effort by atheists on behalf of the Leukemia and Lymphoma Society. A lot went to help victims of natural disasters. And major gifts were given to the Dudley Street Neighborhood Initiative and Starfish, recipients of our Compassionate Impact Grants.

“The board of directors, the staff, the volunteers and the members of Foundation Beyond Belief are very proud of having reached this important milestone,” said FBB Executive Director Noelle George. “But in a world still full of so much suffering and injustice, we feel like our work has just begun. We remain committed to the idea that humanist principles only matter if you put them into action in a tangible way that helps others. We look forward to expanding our programs to accomplish even more over the next two years and beyond.”

On top of that, our Beyond Belief Network of volunteers are doing amazing on-the-ground work and our Humanist Service Corps team recently left for Ghana to begin a year-long service project. This is Humanism in action. And it beats the hell out of prayer.

I am so proud to be a part of this organization. If you’re not a member already, please consider becoming one. There’s so much momentum and we need your help to keep this work going, maybe now more than ever before.

August 13, 2015
A Christian Chaplain is Mad That He Can't Tell LGBT Juvenile Inmates They're Hellbound Sinners
Next Post

August 13, 2015 You Were Right... Salvation Lies Within
Browse Our Archives
What Are Your Thoughts?leave a comment