One month ago, Bay County (Florida) Sheriff Frank McKeithen decided to put “In God We Trust” stickers on every patrol car in his department: 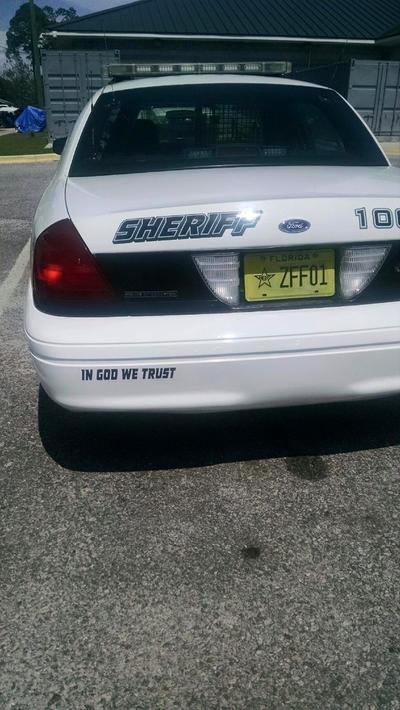 McKeithen didn’t even hide behind the “It’s the National Motto!” defense. He came right out and said “we should display our morals and values” on the cars.

But maybe you could argue he’s still speaking in code. He’s not explicitly promoting religion.

Well, the other day on Facebook, McKeithen announced the county’s new theme song: Diamond Rio’s “In God We Still Trust“: 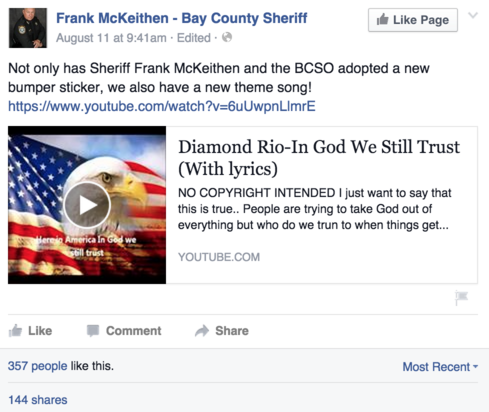 These are some of the lyrics to the song:

Now there are those among us, who want to push Him out,
And erase His name from everything, this country’s all about,
From the Schoolhouse to the Courthouse, they’re Silencing His Word,
Now it’s time for all Believers, to make our Voices heard.

If there was any ambiguity before, it’s gone now. McKeithen is obviously pushing Christianity on the citizens. Even if this Facebook post is a joke and nothing “official” is happening, he’s still promoting his faith on a Facebook page for his government position (as opposed to a personal page). How many times is he allowed to cross the line before anything can be done about it? What good is a Sheriff who doesn’t give a damn about the Constitution?

To make matters worse, according to Robert Ray at OriginalMotto.us, someone was deleting comments on the Sheriff’s post that were critical of the song selection.

Lots of shadiness all around…

(Thanks to Angela for the link)

August 13, 2015
This is Why You Should Pay Attention to Line Breaks
Next Post

August 13, 2015 Pastor Defending Nativity Scene on Public Property is Indistinguishable from a Parody in The Onion
Browse Our Archives
What Are Your Thoughts?leave a comment