As you may have heard, Target has decided to move away from gender-specific labeling in their children’s departments. Toys are no longer going to be for “girls” or “boys,” for instance. It sounds like a pretty good idea. After all, as this rather handy flowchart indicates, the process for evaluating whether we should be concerned about gender for kids’ toys isn’t very complicated: 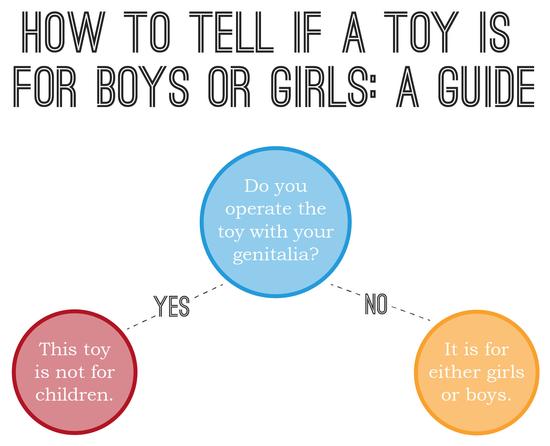 In all seriousness, kids don’t need to be told which toys to play with based on our gender constructs. Some kids like How to Train Your Dragon and Minecraft. Some like dolls. Many like both. That isn’t going to change because we stop labeling some things “boys” and some “girls.” What will hopefully change is that kids will feel less pressure to conform to adults’ ideas of what toys they should be playing with. They’ll have more freedom to explore their own interests without thinking that certain toys are “wrong” for them.

That’s not the way Franklin Graham sees things, though. On the contrary, in a Facebook post that has been reshared by such luminaries as Sarah Palin, Graham not only bemoans the move, but urges shoppers to boycott the retailer.

The Washington Post reports that Target will stop using gender specific signage in their stores. In order to be gender-neutral, they won’t be separating things like toys and bedding into boys’ and girls’ sections. Oh really? And they won’t be using pink and blue colors to identify sexes. I think Target may be forgetting who has made their stores strong. It’s not gender-neutral people out there — it’s working American families, fathers and mothers with boys and girls they love. What’s next? Are they going to try to make people believe that pink or blue baby showers are politically incorrect? I have news for them and for everyone else — God created two different genders. Jesus said, “Have you not read that He who created them from the beginning made them male and female (Matthew 19:4). You can’t get any clearer than that. If you agree, share in the comments below — and let Target know what you think. Let them know that you are perfectly willing to shop where the genders God created are appreciated. (1-800-440-0680) Target is way off-target on this one!
‪#‎OffTarget‬

God made two distinct genders, dagnabbit, and if that’s not reinforced through toy and bedding labels, we’re on the slippery slope away from pink or blue baby showers! Which, I guess, is also a problem.

Nobody tell Graham that there are actually gender-neutral baby colors and color combinations now. Or that the idea of pink as feminine and blue as masculine are fairly recent developments. (It’s as if colors aren’t inherently gendered, and it’s us who bring gender into it…)

But, really, even within his framework of two distinct genders decided by God, how can Graham conclude that removing gendered signage is a problem? If boys are naturally programmed by God to like dragons and trucks, and girls to like cooking and doll houses, is a missing sign going to change that? Of course not. The concern, then, must be the opposite — that kids are not programmed that way, and thus “need” the signage.

Why? How in the world is it beneficial to tell a child to limit his or her imagination? Or, conversely, how could it possibly be harmful to children when they aren’t limited in this way? Whether kids are grocery shopping or building settlements, fighting dragons or tending to baby dolls, there’s nothing gender-specific to this make-believe. (And the more closely the play resembles reality, the more obvious this becomes: boys and girls both become parents, go shopping, etc.)

There is no logical reason that gender-specific signage is necessary — not only because gendered toys for children make little sense and there are better aisle arrangements possible, but also because they can be downright harmful in foisting artificial barriers on a child’s imagination. Even within a worldview that denies the experiences of everyone who falls outside its strict gender dichotomy, this is a nonsensical approach. In light of the fact that gender is not a binary, it’s even more absurd.

August 12, 2015
Pat Robertson: Christians Can Ignore the Book of Leviticus (but the Anti-Gay Parts Still Apply)
Next Post

August 12, 2015 Couple Accused of Sexually Abusing Child for Years, Using the Old Testament to Justify Their Actions
Browse Our Archives
What Are Your Thoughts?leave a comment