Five Reasons You Should Back The Bill Nye Film Kickstarter August 12, 2015 Tracey

Five Reasons You Should Back The Bill Nye Film Kickstarter

If you haven’t heard of the forthcoming documentary about Bill Nye, slickly titled The Bill Nye Film, welcome back to planet Earth. You’re just in time to take part! 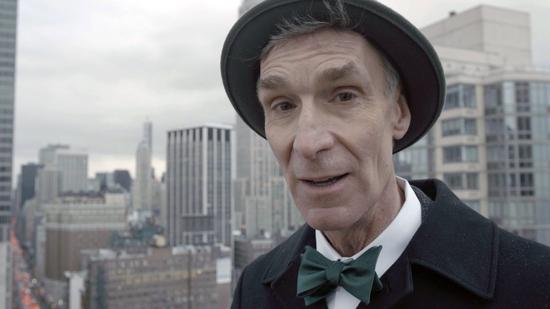 Filmmakers David Alvarado and Jason Sussberg (The Immortalists) have set out to chronicle the public reemergence of science communicator, comedian, author, and engineer Bill Nye. If the trailer is an indication of what’s to come, the project looks like it will be inspiring, mentally engaging, and high quality.

Money for the film is being raised on Kickstarter. While the filmmakers have already hit the target amount, there are still good reasons for chipping in before the window closes tomorrow.

Need a little nudge? Here are 5 reasons you should consider backing this project:

1. Science communicators are our allies.

As a reader of this site, you’re probably someone who values an evidence-based life. Bill Nye, along with his science-crusading cohorts like Neil deGrasse Tyson, Stephen Hawking, Carl Sagan, and so on, are (or have been) among the loudest voices of reason in the media. Nye has worked tirelessly to deflect climate change denial and, you may have heard, took part in a very widely-watched debate that, if nothing else, led some Young Earth Creationists to learn some fundamentals of evolutionary biology. [Hemant’s note: I’ve personally met people who went from Creationist to atheist as a result of that debate. They had never heard about how evolution works until Bill Nye talked about it that night.]

2. It’s time to see the more complex side of the Science Guy.

A majority of Bill Nye’s fans likely know him as the clean-cut, dad-joke-telling Science Guy. That’s partly why his recent cameo on Inside Amy Schumer — in which he ended the anti-science sketch by dropping the mother of all lines, “That just makes no fucking sense. I mean, that’s just bullshit. Fuck” — resonated so much with viewers. The comment threads were overflowing with amusement over his out-of-character, colorful language.

Bill, I think the world is ready for the real you. The multi-dimensional, uninhibited, passionate man who occasionally tells risqué jokes and bares humility with grace when evidence changes his mind on former convictions.

3. This film will be around to inspire future generations.

It’s not often that we see a biographical documentary made during the subject’s lifetime. This is a fleeting opportunity to capture Nye’s true essence and enthusiasm during the peak of his career. This film will include a message intended to stir optimism-driven action, which will hopefully remain relevant to everyone who has a chance to see it. Nye’s story is a quirky but genuine model of consistency in pursuit of what’s best for humanity. If the film can inspire some children, a decade down the road, to be as relentlessly passionate about science as the popularizers we mentioned earlier, why not support that?

4. You get really cool loot!

Okay, let’s get real. Our levels of giving are determined largely by how cool the rewards are. I couldn’t throw my money at this campaign fast enough to score the nerd gear. I mean, a doggie bow tie!? I don’t even have a dog, but I’m willing to bet it fits my cat. Rewards range from The Science Guy emoji set ($10) to having Bill F’n Nye teach a class at your school ($10,000). On the more modestly-priced end, you get a pre-screening of the film, your name in the credits, Pluto-themed coasters, a mug or flask with a molecular illustration of the contents, t-shirts, and signed goodies. And for just a stretch-over-modestly-priced, you can attend The Amazing Science Shindig (which speaks for itself) where you get to hang with the man of honor.

5. The filmmakers have raised a lot for this film already, but keep in mind the fine print.

The filmmakers have set a record for the most-funded crowd-sourced documentary on Kickstarter. Until a couple of days ago, that record was held by Adam Nimoy for the posthumous documentary of his father Leonard Nimoy, titled For the Love of Spock. When The Bill Nye Film campaign ends, those funds will dwindle down a bit. Kickstarter’s fees are around 10%, there’s the realistic expectation that some contributors’ cards will be declined, and there’s also the cost of covering all that fancy merchandise. Whatever is left is the entirety of the film’s budget. Filming began late last year and is predicted to wrap up late next year, so the more funding available, the more Jason and David can follow Bill Nye everywhere something worth capturing may happen. That equates to a lot of jet-setting and hotel crashing. (Other expenses include post-production and licensing fees for use of clips throughout Nye’s television history.)

Want a sample of what you’re paying for? Watch this teaser segment with the Science Guy dropping some climate science knowledge:

August 12, 2015
Bryan Fischer: We Must Screen Every Thought We Have to Make Sure God's Okay With It
Next Post

August 12, 2015 Bedford County (VA) Officials Spent $924 of Taxpayer Money to Put Up "In God We Trust" Sign
Browse Our Archives
What Are Your Thoughts?leave a comment