Couple Accused of Sexually Abusing Child for Years, Using the Old Testament to Justify Their Actions

In a horrific story coming out of Port St. Lucie, Florida, a 21-year-old woman says her caretakers physically and sexually abused her for most of her teenage years, using the Bible to justify their actions.

It began when the woman was 13. After her biological mother died, she was taken in by Rob and Marie Johnson (below). Rob was related to the mother. The abuse began almost immediately: 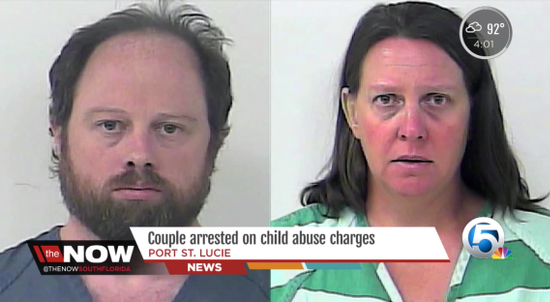 The victim who is now an adult told investigators within the first week of living with the Johnsons that the husband and wife told her that to become part of the family she would have to have sex with them. She says she was forced to perform sexual acts on both.

“If she did not, the threat was that she would be turned over to state custody,” said Port St. Lucie Police Detective Daniel Herrington.

Where does the Bible come into play?

All the while, Rob Johnson held Sunday school classes for his family at their home, invoking Old Testament Bible passages to justify the actions, the arrest affidavit said.

I have no clue which passages they were invoking — obviously it has nothing to do with anything Jesus ever said — but I don’t recall any verses that involve pushing a child against a wall and holding her by her throat until she agrees to submit sexually.

How fucked up do you have to be to do this at all, much less use some Bible passages in your defense?

The Johnsons were “charged with two felony counts of sexual assault against a child” and released on $60,000 bail earlier today.

(Image via WPTV. Thanks to David for the link)